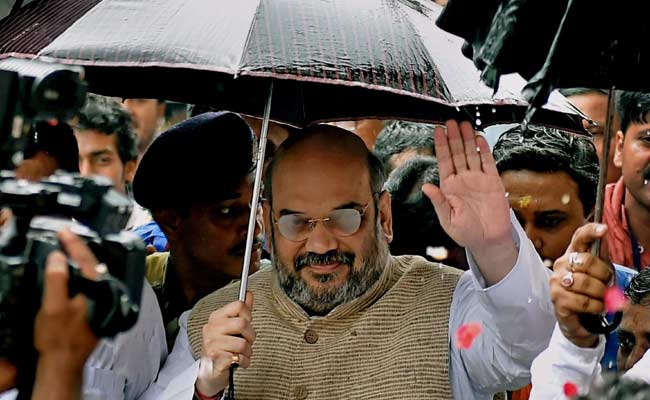 The Janata Parivar alliance formed by Bihar chief minister Nitish Kumar and former chief minister Lalu Prasad with the Congress and other parties has proved to be a damp squib, said BJP President Amit Shah today.

He was speaking to party workers after the BJP-led NDA alliance won more than half of the 24 seats in the state legislative council elections in Bihar.

Mr Shah said, "The countdown to BJP's victory in Bihar has started today. The BJP-led NDA has won 13 out of 24 seats while it earlier held only five seats. There was a lot of hype around Janata Parivar in Bihar but people have proved that it is a damp squib."

Both Mr Kumar and Mr Prasad are OBC leaders, and assembly elections in Bihar are due in a few months. In a state where caste equations are crucial for electoral success, the BJP has just created a new morcha (wing) for the Other Backward Castes (OBCs) in their party organization.

While addressing the first meeting of the OBC morcha, Mr Shah said,
"The BJP has given the maximum number of OBC chief ministers. And the first Prime Minister from the community has also come from BJP. Today, the most OBC MLAs and MPs come from BJP. It shows how much importance the party has been given to OBCs."

The BJP claims that their win in the legislative council is a clear reflection of people's anger against the state government. Mr Kumar has rejected BJP's saying these elections have a limited number of voters, but the results will be reviewed by his party, the Janata Dal United (JDU) to identify any shortcomings.
Comments
Bihar AllianceBihar Assembly Election 2015Bihar Anti-BJP AllianceJanata Parivar allianceJanata ParivarAmit ShahNDA (National Democratic Alliance)BJP president Amit ShahBihar