A vehicle carrying civilians got stuck on the Tangdhar-Chowkibal axis on Monday, following which the nearest Army unit was alerted and a rescue operation launched, they said. 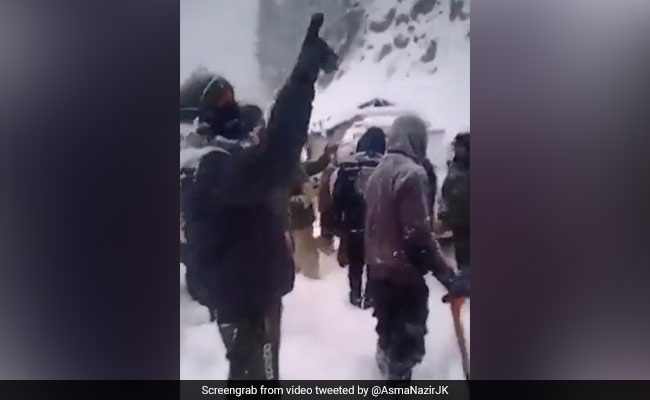 The Army rescued around 30 civilians after their vehicles came under an avalanche triggered by recent snowfall in border district of Kupwara in Jammu and Kashmir, officials said on Tuesday.

A vehicle carrying civilians got stuck on the Tangdhar-Chowkibal axis on Monday, following which the nearest Army unit was alerted and a rescue operation launched, they said.

"The civilians, including a child, were evacuated to safety by the Army rescue team," the officials said.

One of the civilians told the rescuers that they had a narrow escape as they managed to jump out of the vehicle before it was buried under snow, the officials said.

They said the Army team also recovered the vehicle from the mounds of snow.

Another group of 16 civilians, who were stuck at some distance away on the same road, were rescued by the Army personnel to NC pass, popularly known as Sadhna pass, a defence spokesman said.

He said the rescued persons were provided food, medical care and shelter for the night.

"Twelve vehicles were retrieved during the day on Tuesday after the avalanche and snow slides clearance from the road. BRO GREF played a difficult but stellar role in snow clearance amidst dangerous conditions," the spokesman said.

He said the entire operation took five to six hours.