Snow, cold climatic conditions and inhospitable terrains are what the soldiers have to fight during their long range patrolling to guard the Line of Control, says a jawan. 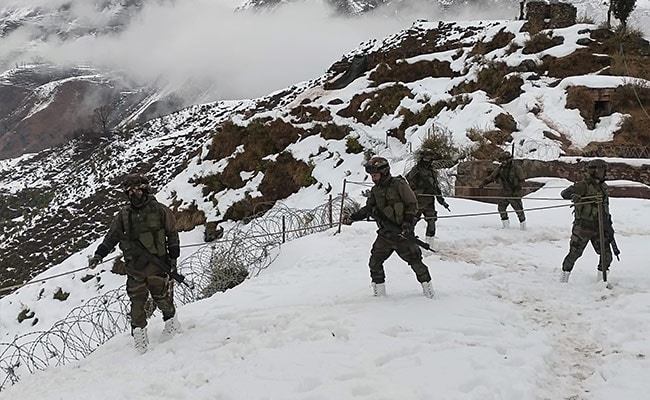 Ahead of winter, army prepares rope networks to forward and hilly posts to patrol Line of Control.

Back-deep into a tapestry of heavy snow, Indian soldiers brave extreme weather and inhospitable terrain to conduct patrolling and keep a 'hawk's eye' on infiltrating terrorists ready to sneak into this side of the Line of Control (LoC) in the Poonch sector.

Sepoy Surinder Singh (named changed), walks through deep snow daily to man the listening post in forward area at a height of 7,000 feet along LoC in Poonch sector to keep vigil on the movement of infiltrating terrorists camped in launching pads across the border ready to sneak into this side, if they get slightest opportunity on the surveillance front. 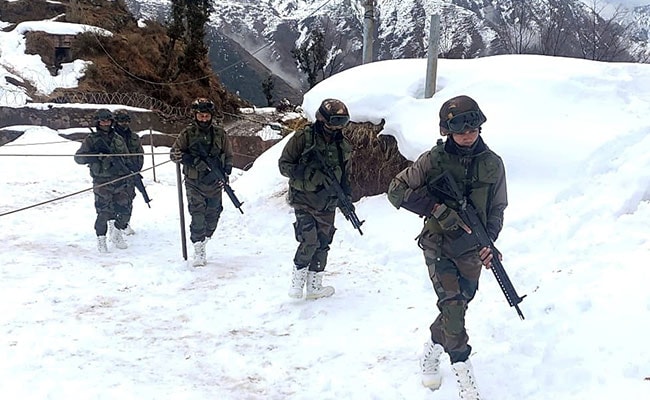 "Snowfall or no snow--chilly winters or dangerous gorges--threat of attacks - our morale is high to keep round the clock vigilance along LoC. We are not scared of such situations and circumstances", a soldier guarding a forward post through his surveillance equipment tells the visiting journalists in Poonch.

The troops had to battle with nefarious designs of cunning enemy troops and their snipers, terrorists awaiting for opportunity to sneek in, and threat of attacks by Pakistan's border action teams (BATs) on one side and extreme cold climatic conditions, inhospitable terrains and deep gorges on their side of the borderline with Pakistan.

Another soldier says that they have to fight snow, cold climatic conditions and inhospitable terrains during long range patrolling to guard LoC. 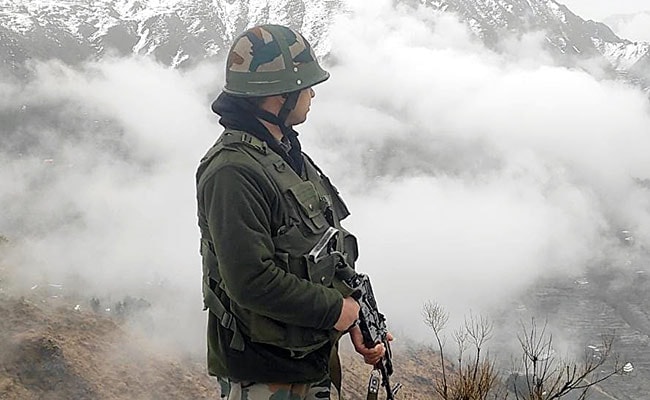 "Visibility in cloudy and snow fall conditions along the LoC becomes so poor that we cannot see our own jawans even at a distance of some metres. At the same time, we have to protect ourselves from nefarious designs of Pakistan '', he said.

Ahead of the winter, army prepares rope networks to forward and hilly posts to patrol the LoC with the help of these ropes, they said adding that they are armed with a new set of rifles including Israel made light machine guns 'Negev NG-7' and high tech surveillance equipment.

NG-7 SLR, which in automatic mode has a rate of fire of over 600-700 rounds per minute and weighs over 8 kg, was inducted into Army along LoC last year as it can target up to one kilometer. 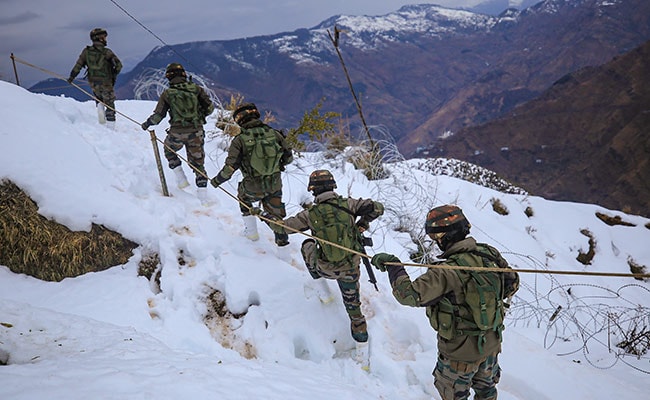 "Due to heavy snowfall, we move and patrol LoC with the help of the rope. It is put in place ahead of winters as a part of winter strategy," one Army man said.

Another soldier manning a high-altitude post at Hajipur bulge says that they have now Isreali weapons, which had replaced old Indian INSAS rifle.

"It is effective weapon. It is an Isreali rifle. Its weight is 8.2 kgs. It has a one kilometer range. Its cycling fire rate is 600-800 rounds per minute", he said. 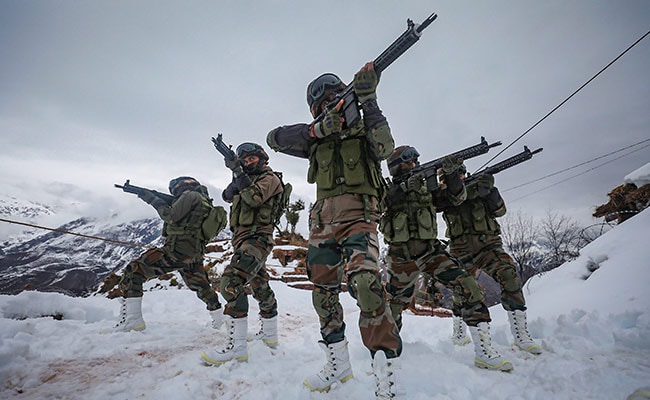 The officials says that it is daily drill to patrol LoC, keep surveillance on launching pads and infiltrating terrorists, movement across LoC, alertness from snipers and Pakistan's BAT team and check border fencing from any intrusion.

The Indian Army along with fighting the enemy has to secure their own safety in the changing weather conditions from time to time.

"The weather conditions can turn extreme and thus bunkers have been revamped. Now army personnel guarding the borderline have graded its bunker to Fiber Reinforced plastic (FRP) to sustain temperature changes," an Army personnel said. 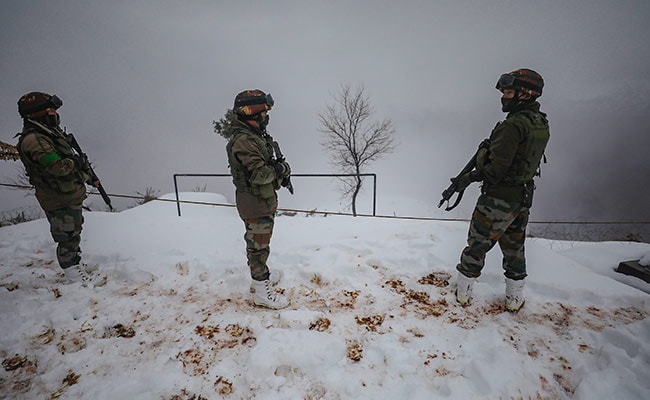 "We come back from duty guarding LoC and patrolling after six hours in this FRP bunker. We instantly feel comfortable from extreme chilly weather as the temperature is hot inside. We have heating arrangements as well inside", a soldier said.

He says inside it "we feel home like conditions".

Soldiers maintain that they had over 200 to 250 terrorists staged on launching pads across LoC in Nijapira area ready to infiltrate into this side.

"We keep a continuous surveillance on their movement across through high tech equipments," a army man deployed on a surveillance, said. 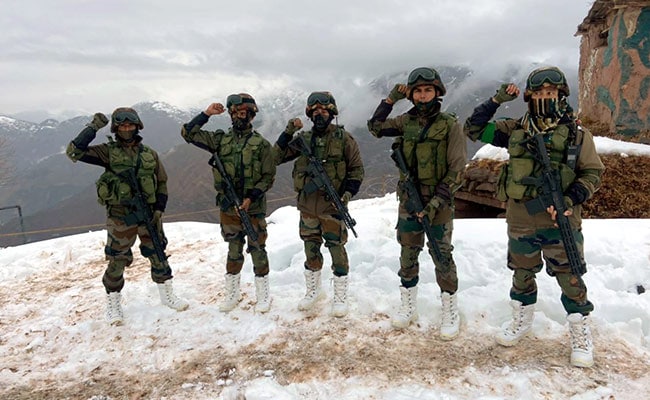 Pakistan tried to activate border belt of twin border districts of Rajouri-Poonch in 2021 by pushing in more terrorists to engineer terrorists incidents in the area but the Indian Army foiled those bids.

Situation in the past year in Poonch-Rajouri sector has become fragile following series of encounters, and killing of half-a-dozen terrorists which has forced soldiers, officers and commanding officers to remain on their toes along the 225-km-long LoC.

A soldier manning a LMG post, bang on Zeroline in HP sub-sector pointed out in the dark and said in a defiant tone, "We will not be cowed down."