Heavy Snowfall In Kashmir, Landslides Due To Rain On Jammu-Srinagar Road

Jammu and Kashmir weather: According to officials, rainfall resulted in landslides on the Jammu-Srinagar National Highway at several places. 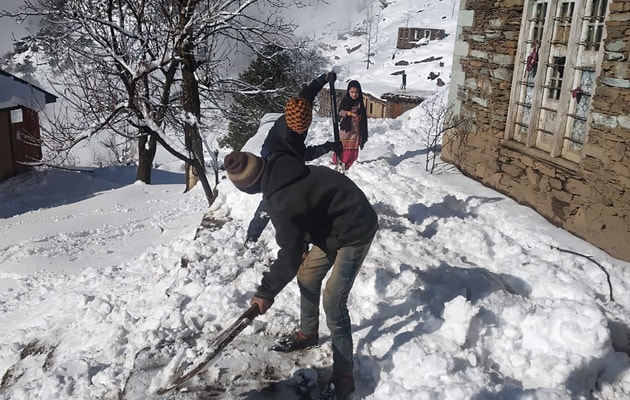 Jammu & Kashmir weather: Children clear snow near their houses in Doda on Saturday

A white blanket of snow covered Kashmir on Saturday as all parts of the valley received fairly heavy snowfall. Snowfall began on Friday night in most parts of Kashmir and just after midnight in Srinagar city. While two to three inches of snow had accumulated in Srinagar by daybreak, the hilly areas of the valley received snowfall between 12 to 24 inches, officials said adding that rainfall resulted in landslides on the Jammu-Srinagar National Highway as well at several places. This led to the closure of the arterial road. Other roads connecting the valley to the rest of the country have also been blocked due to snowfall.

The administration in Kashmir deployed personnel with machines to clear the snow and restore electricity in the affected areas. The 270-km Jammu-Srinagar National Highway was closed due to overnight snowfall. Eight families have been moved to safer locations after heavy rain triggered landslides in Doda district, officials said on Saturday.

Nine inches of snow has accumulated on the ground at the Jawahar Tunnel. The key road link is blocked at several locations like Marog, Magerkote and Panthiyal due to landslides. The Mughal Road, an alternative route, connecting Poonch and Rajouri districts in the Jammu region with south Kashmir's Shopian was also closed for traffic on December 8 following heavy snowfall.

Reports of three to nine inches of snowfall were received from different parts of Kishtwar, Warwan,  Machail, Ishtiyari, Kishtwar, Paddar and Dachin, the officials said.

Jammu city saw a clear day after overnight rain. The weather is improving gradually across Jammu and Kashmir and it is likely to remain overcast throughout the day in Ladakh, a spokesperson of the meteorological department said. "No major snowfall activity is expected till December 20," the spokesperson said but added that there was widespread rain and snow in Kargil and higher reaches of Leh throughout the night.