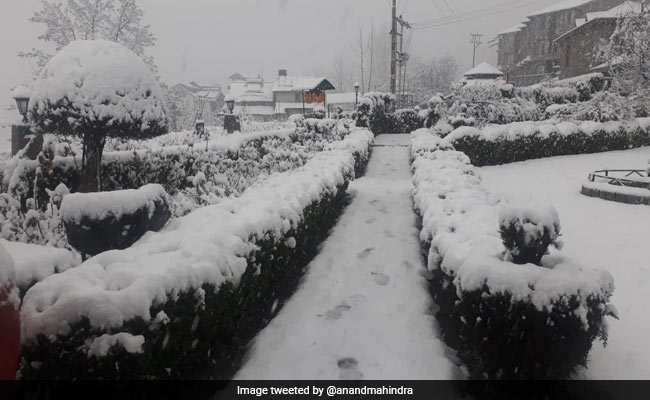 Industrialist Anand Mahindra whose Twitter timeline is a goldmine of wonderful content today shared pictures of snowfall in Manali. "What tantalising images shared this morning by @singhkavinder MD of
@clubmahindra...Oh man, now I really do feel like hopping into a Thar & hitting the open road to the North...," Mr Mahindra tweeted and as always his tweet struck a chord with netizens.

What tantalising images shared this morning by @singhkavinder MD of @clubmahindra The first snow at our White Meadows Resort, Manali. Oh man, now I really do feel like hopping into a Thar & hitting the open road to the North.. pic.twitter.com/qfWZcIwFfN

The cold wave sweeping Himachal Pradesh has intensified, and the minimum and maximum temperatures across the state dropped a few notches on Friday, the meteorological department said. Keylong was the coldest place in the state at minus 5.4 degrees Celsius and Kalpa in Kinnaur recorded a low of minus 0.4 degrees Celsius.

The minimum temperatures in Manali, Kufri and Dalhousie were recorded at 4 degrees, 5 degrees and 5.4 degrees Celsius. Shimla recorded a low of 7 degrees. The weather office has predicted more rain in the plains and snowfall in the hilly regions of Himachal Pradesh on Saturday.

A white blanket of snow covered Kashmir as all parts of the valley received heavy snowfall leading to the closure of roads.