Jammu and Kashmir Governor Satya Pal Malik said Rahul Gandhi should understand that the visit would have created problems for people. 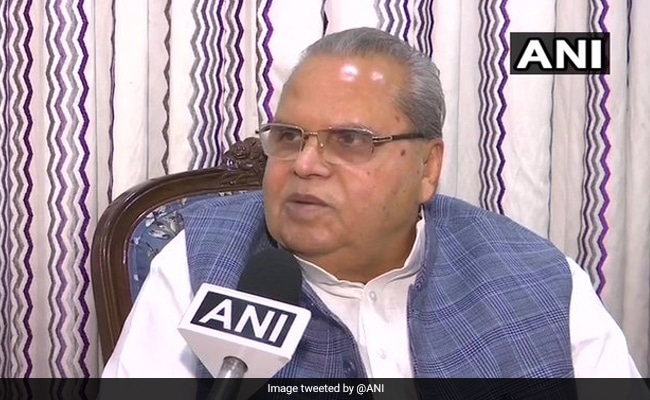 Satya Pal Malik said that the Congress leader had turned it into "non-ending issue".

Jammu and Kashmir Governor Satya Pal Malik on Monday accused Rahul Gandhi of playing politics over his invitation to visit the Valley, saying he just wanted to refrain him from making "baseless statements".

"I want to make it clear that when I had invited Rahul Gandhi to Jammu and Kashmir, my intention was that he will refrain from making baseless statements about Kashmir by having the first-hand appraisal of the situation," the governor said in a statement here.

He added that the Congress leader had turned it into "non-ending issue".

Accusing Rahul Gandhi of playing politics over the issue, Mr Malik said he arrived along with a host of opposition leaders and said he would meet all detained leaders and interact with mediapersons.

"When Rahul Gandhi played such kind of politics with my invitation, I withdrew my invitation. And it was now a prerogative of the administration to decide whether Rahul Gandhi should visit Kashmir or not," he said.

Mr Malik said the administration had made it clear beforehand that at a time when they were making efforts to maintain peace in the Valley, no politician should come to "make a breach", rather "help in maintaining peace".

He said Rahul Gandhi should understand that the visit would have created problems for people.

"Rahul Gandhi tried to create obstacles in the peace process. When he was not allowed to do so, Rahul on his return to New Delhi made false statements about the situation in Kashmir," Mr Malik said.

"I want to tell Rahul Gandhi that such statements made by him are being used by Pakistan against India. He should understand that the situation in Jammu and Kashmir is fragile and it is the issue of national interest. His statements harm the national interest," he added.

Mr Malik said he wanted to urge Mr Gandhi that he should keep national interest on top, rather than using the sensitive issue for his "cheap politics".