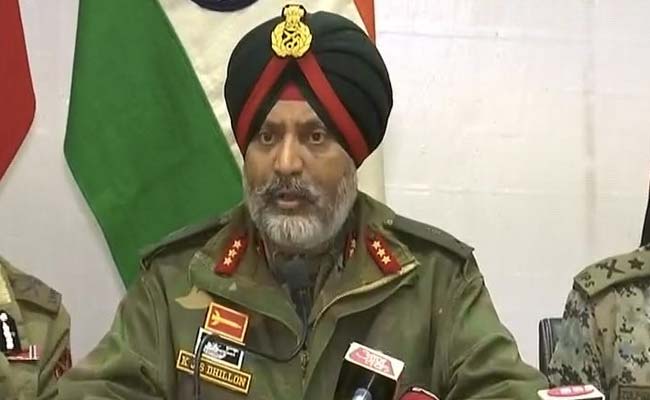 The Pakistan Army and its espionage agency ISI were involved in the car bomb attack that left more 40 paramilitary soldiers dead in Jammu and Kashmir's Pulwama, a top Indian Army official said today. The army also sent out a clear message that anyone picking up the gun to join a terror outfit in Jammu and Kashmir would be eliminated.

The key handler of the Jaish-e-Mohammed or JeM in Jammu and Kashmir was eliminated within 100 hours of the February 14 terror attack in Pulwama, General Officer Commanding Lt General KJS Dhillon added at a press conference along with IG Kashmir SP Pani and IG CRPF Zulfiqar Hasan.

On Monday, three Jaish terrorists were killed in a 16-hour operation in Pinglan area of south Kashmir's Pulwama district, 12 km from the spot of the February 14 terror attack on a CRPF convoy. An Army major and four security personnel lost their lives in the encounter.

"Anyone who has picked the gun in Kashmir will be eliminated, unless he surrenders. This is a message and request to all of them," he said.

"On specific information the day before (intervening night of Sunday and Monday), we hit this module and I am happy to inform the country that in less than 100 hours of the car bomb attack, we eliminated the JeM leadership in Kashmir," he said.

Security forces were tracking the Jaish's top leadership ever since the February 14 attack for which the group has claimed responsibility, the Army officer said.

"The attack was carried out by JeM and it was being controlled by Pakistan with the support of the ISI and the Pakistan Army. The local top commanders, most of them Pakistanis, who were in charge of controlling, coordinating, fabricating and execution of this operation were the main people of the JeM in the Valley," he said.

Last week's strike, when a suicide bomber detonated a car filled with explosives (RDX) near a bus, was a first for Kashmir, he said. "With this type of intensity, it has never happened before. However, similar incidents have happened in other countries like Syria, Afghanistan and Pakistan."

"Since this modus operandi has now been started by terrorists, we are alive to it... we are keeping all options open to deal with this type of modus operandi in future," he added.

Asked if Gazi Abdul Rashid, one of the Jaish terrorists killed on Monday, had an Afghanistan connection, Lt Gen Dhillon said, "Many Gazis have come and gone. There is nothing new in it... We will handle it, Let any Gazi come."

Referring to infiltration attempts, he said there was not much activity along the Line of Control due to snowfall and terrain conditions over the past month but Pakistan has been pushing in infiltrators from other routes on the Jammu side.

"There has been infiltration on the other routes, that is from the international border sector and south of Jammu in the area of Samba, Hiranagar and Pathankot sector. That infiltration is continuing... Pakistan is carrying out infiltration into Kashmir Valley for the results they want."

Nonetheless, the numbers have reduced in the recent past, Lt Gen Dhillon said. "Anyone who enters Kashmir Valley will not go back alive," he warned.

According to him, radicalisation of the youth was a concern, but efforts directed at reversing the trend had started.

"Inimical elements are involved in the radicalisation of youth of Kashmir but the efforts of government security forces and opinion makers have helped reduce it. I would say it is a work in progress and we will continue our efforts and attempts in a collective manner," he said.

Sending out a message to parents whose children had taken up the gun, he said the government had initiated a "very good surrender policy" so their children could join the mainstream.

The GOC said local recruitment had come down in recent months.

Elaborating, IG Pani said there was a significant dip in the recruitment of local youth in terror outfits due to the elimination of top commanders.

"There has not been much of it in the past three months. There are families who have played a key role and made a lot of effort to bring their sons back. Families and the community have an important role to play in this," Mr Pani said.