Police said a few days back a girl was seriously injured in a stone-throwing incident in downtown Srinagar and a case has been registered in that case as well. 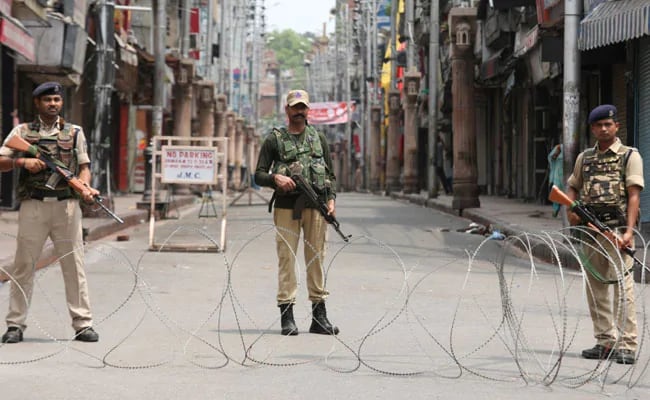 More than 50,000 additional troops have been stationed in the valley. (File photo)

A Kashmiri truck driver was killed on Sunday after he was attacked with stones by protesters in south Kashmir's Anantnag district, police said.

Noor Mohammed Dar, 42, a resident of Zradipora Uranhall locality, was returning home when protesters threw stones at him after they "mistook his truck for a security force vehicle", the Jammu and Kashmir police said in a tweet.

#Stonepelters kill Truck driver.
A truck driver Noor Mohammed resident of Zradipora Urnhall Bhijbhera was hit by stone thrown from a lane at Bhijbhera this evening.The stone pelters pelted stones on the Truck number JK03 F 2540 taking it as a SF vehicle.@diprjk@PIBHomeAffairs

The stone pierced the pane and hit Noor Mohammed Dar's head, they added. He was rushed to the nearby Bhijbhera hospital, from where he was referred to SKIMS Soura. He, however, was declared brought dead by doctors, the police said.

The accused has been identified and arrested, they said.

The stone pierced the pane & injured driver in head.He was rushed to nearby Bhijbhera hospital where from he was referred to SKIMS Soura.He,however, succumbed to his Injuries & was declared brought dead.
The stone pelter has been identified and arrested.@diprjk@PIBHomeAffairs

A murder case has been registered at police station in Bhijbhera, the police added.

Police said a few days back a girl was seriously injured in a stone-throwing incident in downtown Srinagar and a case has been registered in that case as well.

Jammu and Kashmir has been cut off from the rest of India for nearly three weeks to prevent a backlash since the government ended the special status of the state and bifurcated it into two union territories.

More than 50,000 additional troops have been stationed in the Valley and prohibitory orders banning large gatherings are still in place as part of a multi-level preventive measures. The phone connectivity is yet to be restored in parts of Jammu and a huge portion of Kashmir Valley. The state administration has said of the 97 telephone exchanges, only 25 are functioning. The five cater to nearly 35,000 land lines the rest had only and remaining 75 exchanges have only 14,000 numbers.

Jammu and Kashmir Governor Satya Pal Malik claimed that the restrictions were necessary to prevent any loss of life. "Our attitude is such that there should be no loss of human lives. If there's no telephone for 10 days, so be it. But we will roll back these measures very soon," said Mr Malik.

More than 50,000 additional troops have been stationed in the valley. The government said these temporary measures would be lifted in phases by the local administration on the basis of the ground situation.