Soumya Santosh, who hailed from Kerala's Idukki district, worked as a caregiver attending to an old woman at a house in the southern Israeli coastal city of Ashkelon. 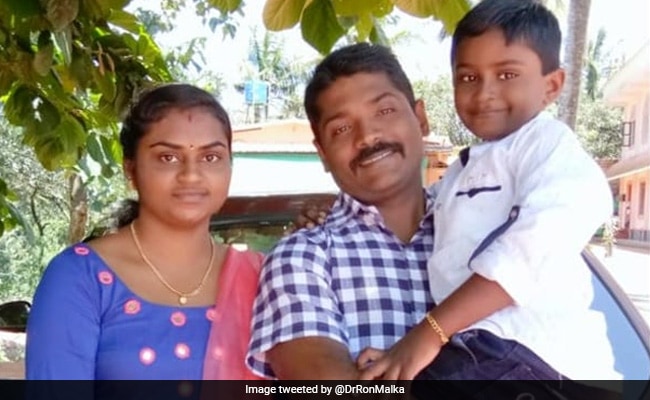 Soumya Santosh was living and working in Israel for the last seven years. (File)

Israeli President Reuven Rivlin on Wednesday spoke to the family of the Indian caregiver who was killed on May 11 in a rocket attack by Palestinian militants from Gaza, and conveyed his condolences.

Soumya Santosh, 30, who hailed from Kerala's Idukki district, worked as a caregiver attending to an old woman at a house in the southern Israeli coastal city of Ashkelon.

She was talking to her husband Santhosh over a video call in the evening on May 11 when a rocket fired from Gaza directly hit the house where she was working.

The details of the conversation the Israeli President had with the family were not available but an Adviser to Rivlin confirmed to PTI that "it did take place".

The Indian caregiver was living and working in Israel for the last seven years. She has a nine-year-old son whom she had left with her husband in Kerala.

Her 80-year-old elderly charge survived the direct hit on the house and was hospitalised.

The rocket shelter was at least a minute's run away from the woman's home and the pair could not manage to reach it in time. The home lacked a fortified room of its own.

Ms Soumya's body were sent to India on May 14 in a specially arranged flight and reached her hometown the next day.

Israel's Ambassador to India, Dr. Ron Malka, also spoke to the family last week to express his sorrow over the incident.

"On behalf of the state of Israel, I convey heartfelt condolences to the family of Ms. Soumya Santosh, murdered by Hamas indiscriminate terror attack on innocent lives. Our hearts are crying with her 9 years old son that lost his mother in this cruel Terrorist attack," Malka said in a tweet.

"I just spoke to the family of Ms Soumya Santosh, the victim of the Hamas terrorist strike. I expressed my sorrow for their unfortunate loss & extended my condolences on behalf of the state of Israel. The whole country is mourning her loss & we are here for them," he tweeted.

The attack reminded him of little Moshe who lost his parents in the 26/11 Mumbai terror attack, the Israeli envoy said.

"My heart goes out to her 9-year-old son, Adon, who has lost his mother at such a young age and will have to grow up without her.

This evil attack reminds me of little Moses, who also lost his parents during the 2008 #Mumbaiattacks. May God give them strength and courage," Malka added.