For, visiting them on Sunday was none other than the Maharashtrian-origin Leo A. Varadkar, the Prime Minister of Ireland, who visited his father's village and spent a night in the family's ancestral home. 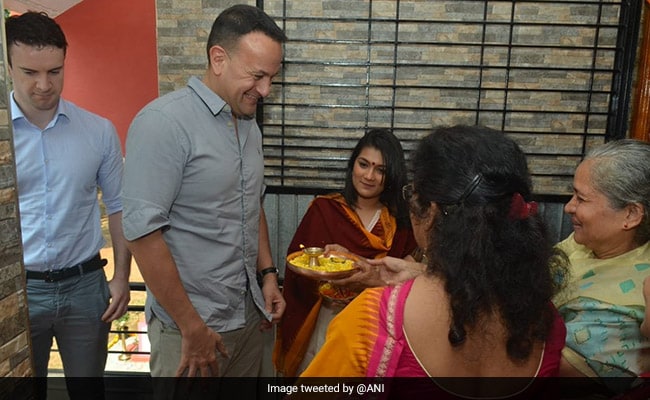 It was like an extended Christmas and an advance New Year celebration for the 3,500-village folk of Varad, in the coastal Konkan region, bound on one side by the Arabian Sea and on the other by the Western Ghats.

For, visiting them on Sunday was none other than the Maharashtrian-origin Leo A. Varadkar, the Prime Minister of Ireland, who visited his father's village and spent a night in the family's ancestral home.

For the first time, he fulfilled his 80-year old father, Ashok Varadkar's desire to visit Varad village, around 525 kms south of Mumbai, close to the Goa border.

"He arrived in Goa on December 28, for a purely private visit, went to Malvan on Sunday (December 29) and spent the night with the whole family, walked around the small village. He will fly back home to Ireland tonight from Goa," his excited close relative, Dipti Bhosale-Varadkar, told news agency IANS.

As per his wishes, there were no VVIP trappings or security or protocol or officialdom for the visiting leader and he roamed around casually, in jeans and shirts, smiling and greeting the village-folk, with a 'namaste' and hearty handshakes.

He marvelled at the simple and typical Konkani village lifestyle, and observed the locals going about their routine chores with interest, she added.

To soothe his palate, there was a surprise - 'modaka' usually prepared during the annual Ganeshotsav festival, plus home-made 'gulab-jamuns', all whipped up by the village women-folk under the close supervision of another clan member Anuradha Varadkar, she said.

The entire family - Ashok Varadkar and wife Miriam, (the Irish PM's mother), sister Sofia and her husband Cainan, their children Nicholas and Susannah, and Sonia with her husband Johnny and their kids Alex and Eric besides Varadkar's partner Matt, all soaked in the rare village outing in the mild sunny winter.

"Leo Varadkar has come to India earlier at least four times, but for the first time he travelled to the remote Varada and each time, he has been astonished at the pace of development he witnessed in this country," said Dipti Bhosale-Varadkar.

The VVIP family spent a night in Goa, then they drove down to Varad, a couple of hours away where they spent the night with the whole village practically sleepless in sheer excitement.

On Sunday, Leo Varadkar visited the temple of the family's diety and a small church in the village, generally relaxed and chilled, and on Monday, along with cousin Shekhar and others, visited his father's alma-mater, the 119-year old co-ed Marathi-medium, ASD Topiwala High School.

"All through, Leo Varadkar was very care-free, mingled with the people, interacted with all the relatives, and took a keen interest in many things," said Dipti Bhosale-Varadkar.

She is hopeful that on his next trip he will take out time to visit the Varadkar clan's bungalow in Borivali suburb of north-west Mumbai.

Mumbai-born Ashok Varadkar (Leo Varadkar's father) has been a regular visitor to Varad, speaks fluent Marathi in Malvan style, has helped rebuild his old school, donated books and uniforms to poor students, and built the family home which he came to see in 2015.

Dublin-born medico Leo Varadkar is the leader of the Fine Gael Party and became the youngest Prime Minister of Ireland at 38, the first of Indian heritage and the fourth openly gay Prime Minister in the world.