The CBI, flanked by the Enforcement Directorate and Delhi Police, arrested him from his Delhi house after high drama that went on for over an hour. 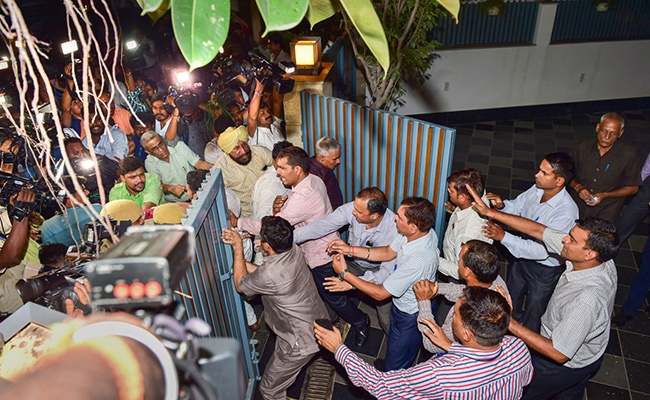 Former Union Minister P Chidambaram's arrest is a "shameless witch-hunt" and an "abuse" of investigation agencies by the Narendra Modi government, the Congress said on Wednesday.

"The shameless witch-hunt and unheard of abuse of CBI/ED by Modi Government 2.0 is playing on every TV screen in India. It's a sham and shame that democracy stands dead in the hands of the BJP," Congress spokesperson Randeep Singh Surjewala tweeted.

Mr Chidambaram, who had gone incommunicado for over 24 hours after the Delhi High Court rejected his anticipatory bail request in the INX Media case, caught the CBI off-guard when he surfaced at the Congress headquarters on Wednesday evening. As he addressed a press conference, the agency rushed to arrest him.

Later, the CBI, flanked by the Enforcement Directorate and Delhi Police, arrested him from his Delhi house after high drama that went on for over an hour.

He was first taken to a hospital for a medical check-up and then to the CBI headquarters.

Mr Chidambaram has been accused of facilitating a huge infusion of foreign funds into a television company, INX Media, in 2007 at the behest of his son Karti Chidambaram, who allegedly received kickbacks for this. At the time, he was the country's finance minister in the UPA government.

The agency had been looking for Mr Chidambaram since last evening. It had visited his house several times, issuing two lookout circulars, meant to stop him from leaving the country.

Mr Chidambaram explained his absence at the press conference, saying he was working with his lawyers. "I was aghast that I was accused of hiding from the law... I was pursuing the law," he said.

The Supreme Court on Wednesday denied Mr Chidambaram's request for an urgent hearing, saying it would hear his petition on Friday.

"Respect for the law can mean only one thing -- await (the Supreme Court's) decision on Friday... Until Friday, let's hope the lamp of liberty will shine bright," he added.