The woman holding the 'Free Kashmir' poster, who identified herself as Mehak, said the controversy surrounding the poster had been "blown out of proportion" and she feared for her safety

Mumbai Police has taken "serious cognisance" of a 'Free Kashmir' poster spotted at the Gateway of India last night during protests against Sunday's mob violence at Delhi's Jawaharlal Nehru University. The poster, held by a young woman who later identified herself as Mehak Mirza Prabhu, was among several held aloft by protesters who had gathered at the iconic monument by the sea after a masked mob, armed with iron rods and sledgehammers, attacked JNU students and teachers and left 34 people injured.

"We have taken serious cognizance of the 'Free Kashmir' poster seen in the protest last night at Gateway of India. Yes, we are definitely investigating it," Sangramsingh Nishandar, Deputy Commissioner of Police, was quoted this morning by news agency ANI.

The Shiv Sena, in power in Maharashtra at the head of an alliance including the Congress and the NCP, has been criticised over the poster by BJP leader and former Chief Minister Devendra Fadnavis.

"Protest is for what exactly? Why slogans of 'Free Kashmir'? How can we tolerate such separatist elements in Mumbai? Uddhav-ji, are you going to tolerate this Free Kashmir Anti India campaign right under your nose???" Mr Fadnavis said in a tweet.

Protest is for what exactly?
Why slogans of “Free Kashmir”?
How can we tolerate such separatist elements in Mumbai?
‘Free Kashmir' slogans by Azadi gang at 2km from CMO?
Uddhav ji are you going to tolerate this Free Kashmir Anti India campaign right under your nose???@OfficeofUThttps://t.co/zkWRjxuTqA

Once steadfast allies, the BJP and the Sena broke apart after October's Assembly elections, in which they emerged as the largest alliance but failed to form a working government.

The Sena's Sanjay Raut said this morning his party "would not tolerate anyone talking of freedom of Kashmir from India". He also said the poster had been misunderstood.

"I read in a newspaper that those who held 'Free Kashmir' banner clarified they want Kashmir to be free of restrictions on internet services, mobile services and other issues," Mr Raut was quoted by news agency ANI.

"Apart from that incident (we need to) look at larger picture... we need to see her intent. Was it to remove internet blockade? If it was to free Kashmir from India, then it is wrong. Obviously everyone condemned it... not even other protesters supported it," the newly sworn-in Environment and Tourism Minister said.

In a YouTube video posted last night Mehak, the young woman photographed with the poster, sought to explain her action and address the "crazy" reaction it has elicited.

"Yesterday (January 6) around 7 pm I reached the protest at Gateway of India and, like anybody else who believes in democracy, I joined it. There were posters relating to many issues - NRC, CAA and, of course, JNU students," she said. 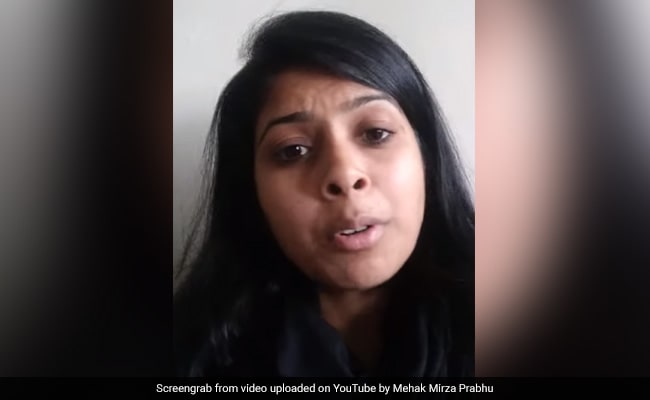 "I saw one on the ground that said 'Free Kashmir' and I thought we are here to talk about basic constitutional rights that people in Kashmir don't have because of the internet shutdown... this is why I picked it up," Mehak explained.

Jammu and Kashmir is facing a prolonged internet shutdown that has been in place since Article 370 was revoked in August last year and the state was bifurcated into two union territories.

Mehak went on to say the controversy surrounding the poster had been "blown out of proportion" and that as a woman she now feared for her safety.

Hundreds had gathered at the Gateway of India on Sunday night in what was described as a "spontaneous" protest against Sunday's brutal attack on JNU students and faculty members. This morning cops forced protesters to move to Azad Maidan, following which the protest was called off.