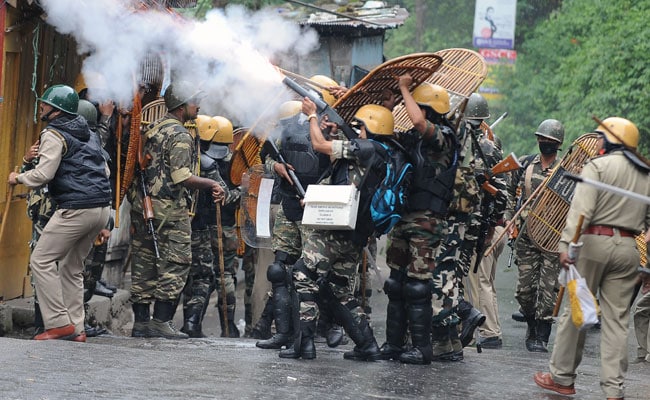 Darjeeling: Security forces patrolled the streets in Darjeeling and internet remained snapped for the second day yesterday as Gorkha Janmukti Morcha or GJM supporters marched at several areas and burnt effigies of West Bengal Chief Minister Mamata Banerjee for rejecting their demand for a separate state.

The GJM has called an all-party in Darjeeling today to discuss the next course of action. In Kolkata, Ms Banerjee asked all parties and stakeholders to attend an all-party meeting convened by the state government in Siliguri on June 22 on the prevailing situation in Darjeeling.

"Violence cannot be a solution to any problem and only talks can solve it," she told reporters. Ms Banerjee had said on Saturday, "I am ready to sacrifice my life, but I will not allow Bengal to be divided."

The GJM ruled out any discussion with the government, but said it would be "comfortable" holding talks with the Bharatiya Janata Party-led government at the centre. The BJP is an ally of the GJM and party MP SS Ahluwalia had won the 2014 Lok Sabha election from Darjeeling with its support.

"We are not ready for talks with the West Bengal government. Mamata Banerjee has insulted us, she has called us terrorists," GJM leader Binay Tamang said.

The GJM protesters yesterday blocked National Highway-31A at some places in Darjeeling to protest the death of three of their activists on Saturday. The 92-kilometres-long NH-31A connects Sevoke in Darjeeling to Gangtok and is considered the lifeline of Sikkim.

Some 30 kilometres of the highway passes through West Bengal. A state police official said, "Raids will continue. In fact, there will be raids tonight itself which will be on the basis of our intelligence inputs."

Anybody disturbing the law and order situation in the hills would face "tough handling" by the police, he said.

The West Bengal government has sent a report on the ongoing violence in Darjeeling to the Union Home Ministry, which has dispatched a contingent of 125 women security personnel to help restore peace in the hills.

The state government's report is under review by the ministry, official sources in New Delhi said. Union Home Secretary Rajiv Mehrishi has also spoken to the West Bengal chief secretary, who demanded that two companies comprising 250 personnel of women paramilitary personnel be sent to Darjeeling, the sources said.

Carrying black flags, protesters marched on the streets at Chowkbazar in Darjeeling, shouting slogans against the state government and Ms Banerjee. "Three of our activists were killed. We are ready to give our lives, but will not stop protesting till we get Gorkhaland," Sirish Pradhan, a GJM worker, said.

Other small processions were taken out by GJM activists in various parts of Darjeeling. Security forces patrolled the streets as the situation remained tense on the fifth day of the GJM-organised indefinite shutdown. "The situation is still very tense. Since morning, there has been no incident of violence. But we are on high alert and are prepared for any eventuality," a senior police officer said.

Promoted
Listen to the latest songs, only on JioSaavn.com
Union Home Minister Rajnath Singh had appealed to the protesters on Sunday not to resort to violence and instead, hold dialogue to resolve any issue. But the GJM expressed its "displeasure" with the centre and questioned the absence of BJP MP from Darjeeling Mr Ahluwalia at the time of the crisis.

"The role of alliance partner BJP is very unfortunate and very disappointing. We had expected something positive on the part of the central government. We feel we are being used as pawns by the centre and the state," Darjeeling MLA and GJM leader Amar Singh Rai said.
Comments
DarjeelingGorkhalandMamata Banerjee