The violence at Bulandshahr, Uttar Pradesh, started this morning when carcasses of 25 animals were discovered dumped outside the village

The body of a police officer was left hanging partly out of his black SUV after he was attacked with stones and allegedly shot dead by a mob that surrounded policemen at a village in Bulandshahr in western Uttar Pradesh on Monday. Inspector Subodh Kumar Singh had reportedly tried to control mob violence that had started after the carcasses of 25 cows were found in the forests close to a police post.

A local man was also killed in an hour of violence provoked by allegations of cow slaughter. The mob left more than five policemen wounded, burned down a police station and set several vehicles on fire.

A cellphone video shows Inspector Subodh Kumar Singh's limp body in his car, its windscreen shattered and doors open. As gunshots ring out, a mob runs around, shouting "goli maro" (shoot him). A post-mortem report has confirmed that Mr Singh died of bullet injuries below his left eyebrow. The mob also took away his service gun and mobile phone.

As the mobile video emerged, the police admitted that Inspector Singh may have died of gunshot wounds. They had first claimed that he died of a head injury after being hit with a stone.

A Special Investigation Team has been formed to investigate the violence. Efforts are on to identify the men seen in the video.

Chief Minister Yogi Adityanath has asked for a preliminary report within two days. He declared a compensation of Rs 40 lakh for Mr Singh's wife, Rs 10 lakh for his parents and a government job for a family member.

Inspector Singh's driver Ram Asre said it was the second time in the day the mob had attacked them. The inspector had been injured in an earlier attack and the driver was about to take him to hospital when the mob caught up with them again. "I ran for my life. I am not sure what the mob did when they reached the jeep," he added.

Earlier in the day, local people and right-wing activists gathered up the cow carcasses in a tractor trolley and tried to block the road. Anuj Kumar Jha, the district magistrate, said the police were attacked when they tried to clear the road. 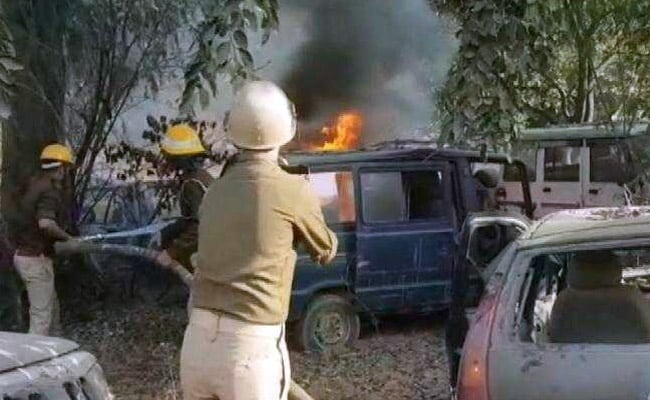 The mob in UP's Bulandshahr set a number of vehicles on fire.

The mob then took the tractor trolleys, parked them outside the Chingrawathi police station and targeted the policemen.

Despite heavy police deployment in the area, things got out of hand.

"Around 400 locals gathered and pelted stones. The Inspector was hit on the head and a couple of other policemen also injured," said Anand Kumar, a senior officer of the state police.

The police fired in the air and used batons to control the situation.

The area is now under a security blanket - over 500 Rapid Action Force and 600 Provincial Armed Constabulary personnel have been brought in as reinforcement.

The violence coincides with a three-day Islamic event that ended on Monday. The police said around 15 lakh people were attending the event, which was held barely 50 km away.