The city police on Tuesday towed away the car of YS Sharmila, Telangana politician and sister of Andhra Pradesh Chief Minister YS Jagan Mohan Reddy, while she still sat inside. 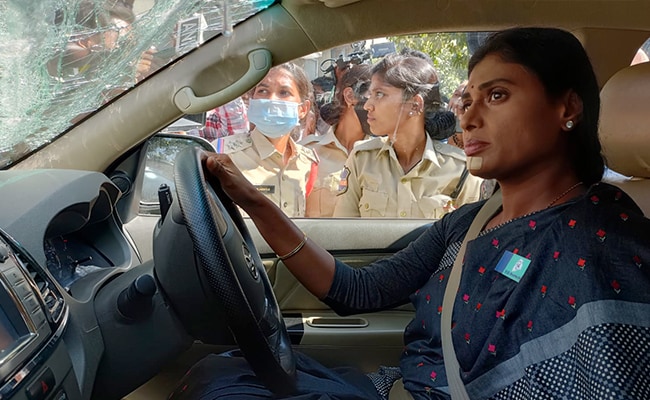 YSR Telangana Party chief Sharmila's mother YS Vijayamma on Tuesday hit out at the TRS-led state government and termed the detention and towing of Sharmila while she was sitting inside the car as 'inhuman behaviour'.

"It's very unfortunate and distressing, the opposition questions the elected government on behalf of the people. When we questioned, they burned the buses, vandalised cars, and tore the flexes, which is not right. The authoritative power of the government is not permanent, god also doesn't support this act," YS Vijayamma told ANI, adding that the repercussions by the government when the opposition questions are inhuman.

Earlier that day, YSR Telangana Party president YS Sharmila was detained by the Hyderabad Police when she was approaching Pragati Bhavan to gherao the official residence of Chief Minister K Chandrasekhar Rao.

She was detained from Somajiguda and brought to SR Nagar Police station in Hyderabad.

Before Sharmila was detained, Police towed away her car with the help of a crane, even as she was sitting inside it protesting against the Telangana CM KCR.

However, hours after her detention, YS Sharmila got released on conditional bail on personal bond by the 14 Additional Chief Metropolitan Magistrate at Nampally.