PM Modi said while noting that the relations between the two countries are not merely confined to governments but are people-driven. 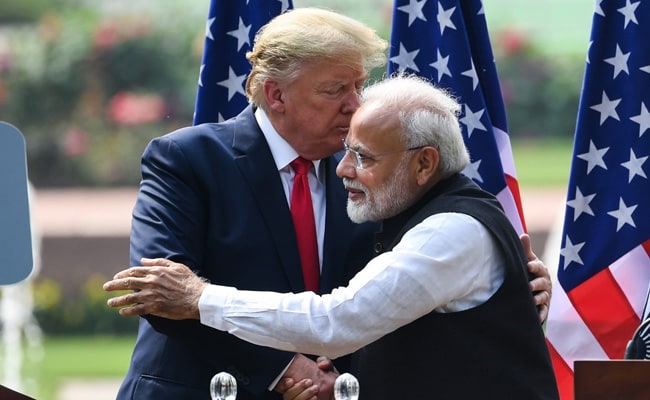 Describing Indo-US relations as "one of the most important partnerships" of the 21st century, Prime Minister Narendra Modi on Tuesday said increasing the bilateral defence and security cooperation is a very key aspect of this relationship.

Addressing a joint press meet with US President Donald Trump after their comprehensive talks on key issues, including trade, counter-terror and energy cooperation, PM Modi said as far as bilateral trade is concerned, there have been positive talks between the two commerce ministers.

"President Trump and I have agreed that our teams will give a legal shape to the understanding that our commerce ministers have reached. We have also agreed to start negotiations for a big trade deal. We hope that it will yield good results in mutual interest," the Prime Minister said.

Asserting that the cooperation between India and the US was based on their common democratic values and objectives, he said this cooperation for rule based international order, especially in Indo-Pacific and global commons.

"Both of us agree on the importance of sustainable and transparent financing in the development of connectivity infrastructure in the world. Our mutual understanding is not only in each other's but the world''s interest," PM Modi said, adding that the two countries have decided to take Indo-US ties to the comprehensive global partnership level.

The unprecedented and historic welcome given to US President Donald Trump in India will be remembered forever, PM Modi said while noting that the relations between the two countries are not merely confined to governments but are people-driven.

Describing the Indo-US relations as "one of the most important partnerships of the 21st century", the Prime Minister said, "increasing defence and security cooperation between two countries is a very key aspect of the strategic partnership between India and the US. We also agreed on new mechanism to contain drug trafficking."

He also noted that he had met Trump five times in last eight months.

In his brief remarks at the start of official talks, PM Modi welcomed the US president and said that he had made "invaluable contribution" to taking the ties between the two countries to this level.

President Trump, in turn, said the last two days in India were amazing, especially the event at the Motera stadium in Ahmedabad.

"It was a great honour for me. I would imagine they (the people) were there maybe more for you than for me... 125,000 people were inside. Every time I mentioned your name, there were cheers. People love you," President Trump told PM Modi in front of the media.

PM Modi said both leaders held a constructive discussion on every important aspect of the partnership between the two countries, be it defence and security, energy strategic partnership, cooperation in technology, global connectivity, trade relations or people to people ties.

Both sides also agreed on having a new mechanism to tackle serious concerns like drug trafficking, narco terrorism and other organised crimes, he added.

India and the US are committed to openness, and fair and balanced trade, and the bilateral trade between them has seen growth in double digit in the last three years, the Prime Minister said.