With Eye On China, Indian, US Navies In Joint Exercises In Bay Of Bengal

A 20-second video of the exercise, shot from a helicopter, shows an aircraft carrier at the head of a formation with three warships on either flank and another in the rear 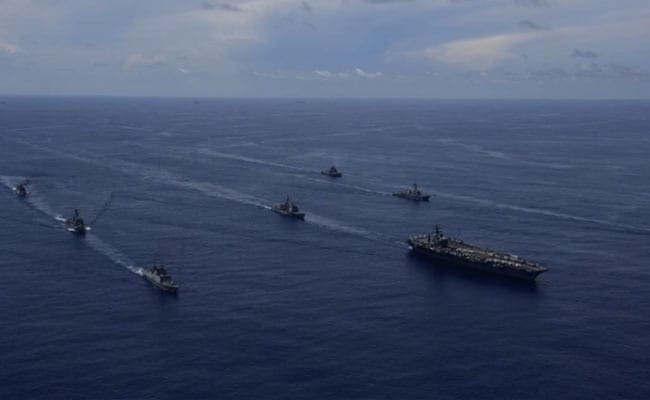 Amid tension between India and China over the Ladakh border dispute in which 20 Indian soldiers were killed in Galwan on June 15, the Indian Navy took part in military exercises with a US Navy battle group near the Andaman and Nicobar Islands in the Bay of Bengal.

The American flotilla, led by the USS Nimitz - a nuclear-powered aircraft carrier - and Indian ships carried out manoeuvres called PASSEX (passing exercise) to build upon years of trust between the two forces.

The Nimitz and the USS Ronald Reagan, another aircraft carrier, and four warships have been operating in the contested South China Sea region to assert freedom of navigation and provide a deterrent to China's expansionist plans.

.@USNavy exercising our freedom of expression in the South China Sea. #censorthishttps://t.co/bvu5JiyR60

Earlier this month the Americans responded to an article by Global Times, a Chinese government mouthpiece, that appeared to warn the US of anti-aircraft carrier weapons.

"China has a wide selection of anti-aircraft carrier weapons like DF-21D and DF-26... South China Sea is fully within grasp of the #PLA; any US #aircraft carrier movement in the region is at the pleasure of PLA: analysts," the publication tweeted.

The US Navy said its aircraft carriers, which were "operating in the international waters of the South China Sea", were unafraid.

And yet, there they are. Two @USNavy aircraft carriers operating in the international waters of the South China Sea. #USSNimitz & #USSRonaldReagan are not intimidated #AtOurDiscretionhttps://t.co/QGTggRjOul

India, the United States and Japan are close naval partners in the region, with Australia likely to take part in the trilateral Malabar Naval exercises in the future.

Indo-US naval exercises come as China conducts military drills of its own in the area, near the contested Paracel Islands; these exercises have been criticised by the US and other countries.

Tensions between India and China spiked after skirmishes in the Pangong Lake region of eastern Ladakh in May and escalated dramatically after 20 Indian soldiers were killed in the Galwan Valley region.

Following extensive high-level military talks between the two sides, a mutual disengagement was initiated, with both forces moving back two kilometres from the LAC (line of actual control).