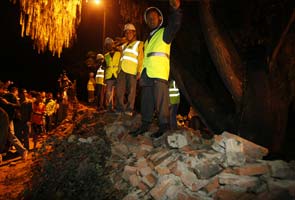 Gangtok: The Indo-Tibetan Border Police (ITBP) has launched search and rescue operations in Pegong area of north Sikkim which has been "badly affected."

The ITBP rescued 15 foreign tourists and 150 villagers in their operations They have been moved to battalion headquarters.

Official sources said the search and rescue operations are getting hampered because there is no electricity in the area.
The ITBP has also lost two of its buildings. However, no casualties have been reported yet.

The sources said the officers mess also suffered some damage.

"Two buildings have collapsed though there has been no casualty. The officers mess too has been hit.

The road outside the battalion headquarters has cracked. We have launched search and rescue operations," sources said.

Promoted
Listen to the latest songs, only on JioSaavn.com
The quake measuring 6.8 on Richter Scale with its epicentre on the Sikkim-Nepal border shook the northeast and northern parts of the country, including the national capital, this evening.