IndiGo instructed pilots of the A320neo-family of jets last month to use no more than 93% thrust on the Pratt engines until they reach 25,000 feet (7,622 meters), the people said 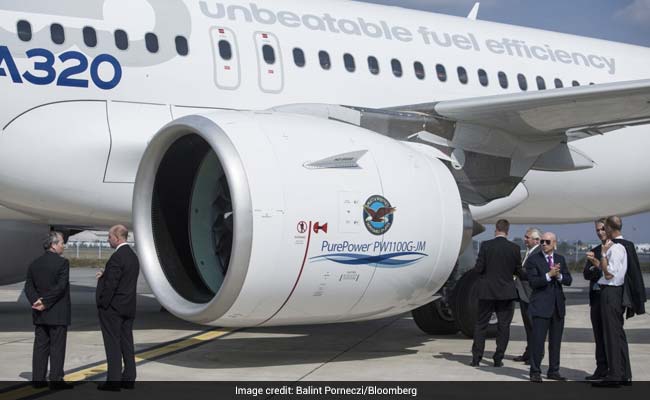 IndiGo has told its pilots to stop pushing engines on its new Airbus SE jets to the limit when the planes are climbing, after India's aviation regulator said the practice may have contributed to turbines failing in the air.

All the budget airline's A320neo aircraft now use a lower thrust setting following take off, according to a spokeswoman from IndiGo, which has suffered 13 engine shutdowns during ascents this year. The decision was taken "in order to make every possible effort to minimize exposure of engines," she wrote in an email, adding that manufacturer Pratt & Whitney stated there's no evidence of a connection between climbing procedure and engine incidents.

Ascending at maximum power can help burn less fuel as it takes less time to reach cruising altitude. IndiGo made the switch only after India's Directorate General of Civil Aviation found in a probe - first reported by Bloomberg on Friday - that full-thrust climbs could wear down the engines and probably contributed to the shutdowns, people familiar with the matter said earlier.

IndiGo instructed pilots of the A320neo-family of jets last month to use no more than 93% thrust on the Pratt engines until they reach 25,000 feet (7,622 meters), the people said. They asked not to be identified because the change hadn't been made public.

The airline spokeswoman said the change had "hardly any difference" in day to day operations, beyond taking two to three minutes longer for aircraft to reach optimum flight level due to lower thrust settings. "Difference in fuel consumption is marginal," she said.

IndiGo's mid-flight dramas have been a headache for the airline. The DGCA has said every time a new plane joins IndiGo's fleet, it must ground one A320neo that hasn't had its engines fixed. That essentially prevents Asia's biggest budget airline by market value from adding new flights until the issue is addressed.

IndiGo is the world's top A320neo customer. It has 730 of the latest model on order and wants to expand its network beyond cities such as Istanbul to destinations including London.

IndiGo told pilots, engineers and training crew in mid November about the "alternate max climb rating option" on its A320neo-family of jets, the people said. Such a practice is also known as a "derated takeoff."

The airline's new guidelines say the Pratt engines on the A320neo cannot return to full thrust before 31,000 feet, while the bigger A321neo needs to gain a further 2,000 feet before maximum power is applied, they said. That process will reduce wear and tear on the engines, and will be applicable to all new engines as well, one of the people said.

Pratt, a unit of United Technologies Corp., invested $10 billion to develop its fuel-efficient geared-turbofan engine for single-aisle jets like the A320neo, but it has suffered repeated setbacks since its commercial introduction in 2016, including a cooling problem, durability issues and delivery delays.

IndiGo shifted away from the engines in June with a $20 billion order to CFM International Inc., a joint venture between General Electric Co. and France's Safran SA, although those deliveries have yet to start.

(Except for the headline, this story has not been edited by NDTV staff and is published from a syndicated feed.)
Comments
IndiGoIndiGo pilots