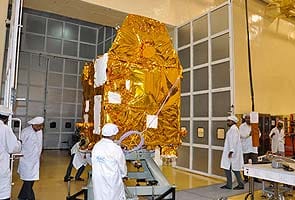 New Delhi: India's Mangalyaan or Mars craft is on the move. The country's maiden mission to Mars or the Red Planet is scheduled for lift off in the afternoon on October 28, 2013.

The mars orbiting mission is an unmanned space craft costing Rs. 450 crore and this inter-planetary mission will study the thin Martian atmosphere after its year-long journey of more than 200 million kilometres.The mission was fast tracked and completed in a record 15 months.

The first leg and the slowest of its journeys by road from the cradle where it was born in India's satellite centre in Bangalore began at 6:00 AM on Wednesday. Its slow-paced convoy, closely guarded by commandos from the Central Industrial Research Force, reached the space port at Sriharikota at about 6.30 pm today, taking a tortuous 36 hours to slowly negotiating the traffic and circumventing anti-Telangana protests. It will be now hurled into space using the Polar Satellite Launch Vehicle using an unconventional trajectory.

Prime Minister Manmohan Singh on August 15, 2012 announced the bold conception of Mangalyaan from the ramparts of the Red Fort while addressing the nation on Independence Day when he said, "Our spaceship will go near Mars and collect important scientific information. This spaceship to Mars will be a huge step for us in the area of science and technology".

Some critics of the mission believe the government is being profligate by going to Mars when there is rampant poverty in the country.

"We have heard these arguments since the 1960s about India being a poor country, not needing or affording a space program. If we can't dare dream big it would leave us as hewers of wood and drawers of water! India is today too big to be just living on the fringes of high technology," a top government official said.

The Indian Space Research Organisation (ISRO) says the satellite which will be placed in an elliptic orbit around Mars and will carry 15 kg of scientific instruments. According to ISRO, the objectives of the mission are to focus on remotely assessing "life, climate, geology, origin and evolution and sustainability of life on the planet".

"This is a technology demonstration project, a mission that will announce to the world India has the capability to reach as far away as Mars," K Radhakrishnan, ISRO's chairman said.

Since 1960, there have been 45 missions to Mars with just about a third of them being successful; attempts have been made by the former USSR and Russia, USA, Europe, Japan and China. The first Chinese mission to Mars called Yinghuo-1 failed in 2011 so some believe that India is trying to march ahead in what has been described as the twenty first century 'Asian Space Race'.

After the successful maiden mission to the moon, Chandrayaan-1 in 2008 the natural stepping stone for India was to try to reach Mars.

K. Radhakrishnan said: "This mars mission is a historical necessity, after having helped find water on the moon, looking for signatures of life on mars is a natural progression. India is now demonstrating its capability to undertake inter-planetary travel with end to end technological prowess in space".

Promoted
Listen to the latest songs, only on JioSaavn.com
Track our full coverage of India's Mars Mission here