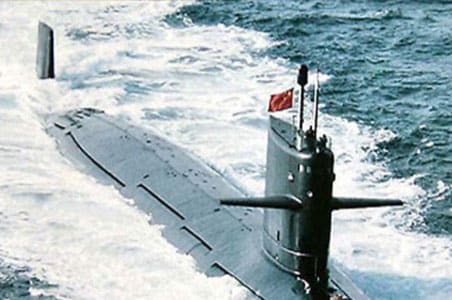 Kaur broke a coconut and performed a puja after which she unveiled a plaque naming the 112-metre-long submarine. "I name it INS Arihant. All the best to the submarine," she said.

Declaring that India has achieved a "historic milestone in the country's defence preparedness" with the launch of the submarine, the Prime Minister said, "We don't have any aggressive designs nor do we seek to threaten anyone.

"We seek an external environment in our region and beyond that is conducive to our peaceful development and protection of our value systems," Singh said in his speech congratulating everyone associated with the advanced technology vessel (n-submarine) programme.

Singh said, "Nevertheless, it is incumbent upon us to take all measures necessary to safeguard our country and to keep pace with technological advancements worldwide".

With the sea trials, India has announced to the world that it possesses underwater platforms capable of launching nuclear weapons, completing its nuclear triad (land, air and sea) capability and strengthening its strategic deterrence.

It also made its entry into an elite club of nations comprising the US, Russia, France, the UK and China, which possess capabilities to develop nuclear submarine.

As India has declared "no first use" of nuclear weapons, the country's weapons system must survive a first strike for retaliation.

Therefore, Arihant's primary weapon is stealth as it can lurk in ocean depths of half a kilometre or more and fire its missiles from under the sea.

The 6000-tonne submarine is powered by an 85 megawatt capacity nuclear reactor and can acquire surface speeds of 22 to 28 kmph (12-15 knots) and submerged speed upto 44 kmph (24 knots). It will be carrying a crew of 95 men and will be armed with torpedoes and missiles including 12 ballistic missiles.

Four more nuclear-powered submarine of this class have already got government's nod and these would add to the Navy's underwater combat potential in the years to come.

The Prime Minister flew to Vishakapatnam on Sunday morning by the IAF's newly acquired Boeing business jet and reached the venue of the submarine launch by road.

Sea trials of the submarine will be conducted in the Bay of Bengal off Vishakapatnam, where the vessel was under construction for the last two decades.

The Rs 30,000-crore secret nuclear submarine project was started in the 1980s though it was conceived by then Prime Minister Indira Gandhi in the 1970s.

The first official admission of the project nearing completion came this February when Antony had announced it during the AeroIndia show in Bangalore.

INS Arihant can also be armed with cruise missiles.

The DRDO is already working on an equally secretive Sagarika project for a 700-km K-15 missile, capable of carrying nuclear weapons.

With US, Russia and China already fielding 5,000-km range SLBMs, the DRDO too has recently tested an SLBM based on the design of 3,500-km range Agni-III.

The induction of ATV will help India to complete the nuclear weapons triad, as envisaged under its nuclear doctrine to deliver nuke-tipped missiles from land, air and sea.

India has land-based nuclear-capable Agni ballistic missiles, apart from IAF fighters such as Mirage-2000 that can deliver tactical nukes.

Promoted
Listen to the latest songs, only on JioSaavn.com
Two decades ago, India had operated a Charlie-class nuclear submarine, christened INS Chakra, leased from Russia for three years between 1989 and 1991.

Moscow will again lease out two Akula-class nuclear submarines to New Delhi for 10 years. Plans to deliver the submarines this June were hit by a mishap during sea trials late last year. But hopes have soared for its delivery in 2010 after Russia took out the repaired vessel for sea trials again early this month.