With roughly 940 foreign service officers, India has one of the most understaffed diplomatic corps of any major country. 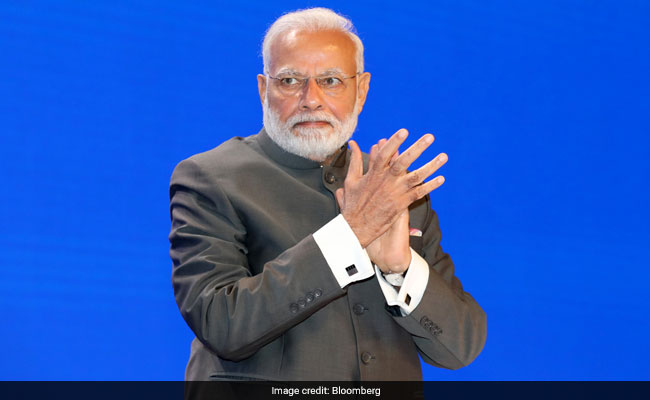 U.S. Secretary of State Mike Pompeo and Pentagon chief Jim Mattis are heading to New Delhi next week for an inaugural set of high-level meetings -- one more sign the West wants to deepen cooperation with India as a hedge against China.

But former Indian officials say an understaffed foreign ministry is holding back Prime Minister Narendra Modi's plan to seek greater global influence in line India's fast-growing $2.6 trillion economy. The nation of 1.3 billion people only deploys around as many diplomats as New Zealand, which has a population of around 5 million.

"We're woefully under-equipped," said former junior foreign minister Shashi Tharoor, an opposition lawmaker who chairs the parliamentary committee on foreign affairs. "This is not worthy of a country of India's size and ambition." 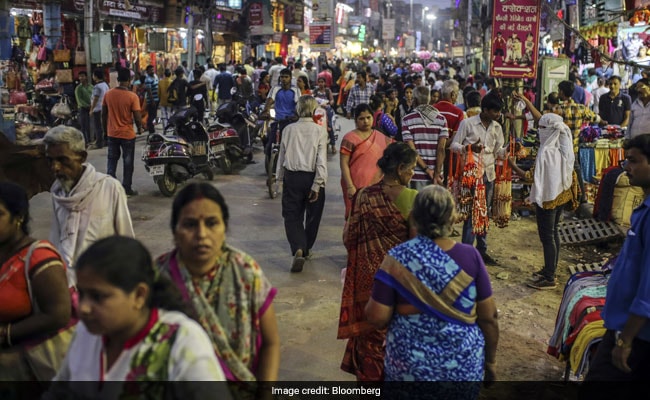 India, a nation of 1.3 billion people only deploys around as many diplomats as New Zealand.

The need for a well-staffed foreign ministry in New Delhi is only growing more urgent, particularly as U.S. President Donald Trump's administration emphasizes outreach to the "Indo-Pacific" region in a bid to elevate India as a counterweight to China. New Delhi has started to take a leading role in pushing back against China's Belt and Road infrastructure initiative, which is encroaching on India's South Asian backyard.

India also has lots of unfinished goals. It's angling for a permanent seat on the United Nations Security Council and membership in the Nuclear Suppliers Group, while trying to defend the global mobility of its IT workers overseas as protectionism rises.

With roughly 940 foreign service officers, India has one of the most understaffed diplomatic corps of any major country -- just slightly higher than New Zealand's 885 officers, or Singapore's 850. It's vastly outnumbered by the Japanese and Australian services of around 6,000 people, the estimated 7,500 diplomats of rival China and the U.S. State Department's service of nearly 14,000.

'We Need The Manpower'

The foreign ministry is aware of the shortage and it's working to bolster staffing, according to one government official, who asked not to be identified to speak about sensitive matters. It has increased recruitment to around 35 new officers annually and borrowed defence and economic experts from other ministries on deputation, the official said.

In 2016, the ministry said it was still 140 officers short of its sanctioned strength of 912 diplomats. It also said it had failed to conduct mandated reviews of its foreign service every two years. The last review had taken place 12 years earlier in 2004. 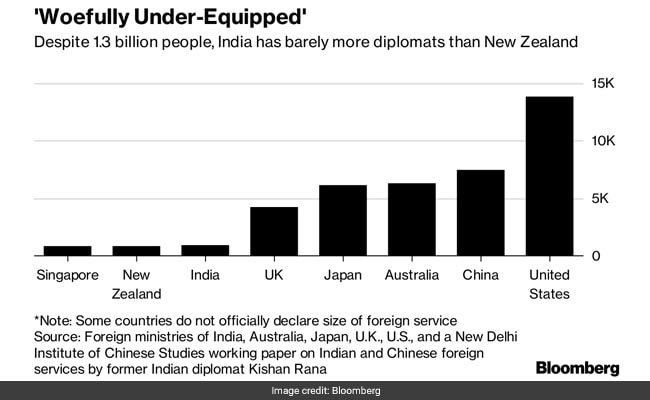 In 2016, the ministry said it was still 140 officers short of its sanctioned strength of 912 diplomats.

India has been unable to reciprocate the opening of embassies in many Latin American countries because of a shortage of Spanish-speaking officers, Mr Tharoor said. Many Indian embassies abroad also have only one ambassador and one other international diplomatic-rank officer, leading to functions being performed by lower-level or local staff who are "under-qualified to perform them," he said. A ministerial stenographer, he noted, was once appointed India's ambassador to North Korea.

"It seems appalling that we have to make do with a diplomat who is only there because he couldn't fulfill his dream of being a police superintendent or customs official," Mr Tharoor said.

The shortage is particularly pronounced at a time when PM Modi has increased his foreign travel, visiting nearly 60 countries in just four years. PM Modi has made five visits each to the U.S. and China and four visits each to Russia and Germany. But thin staffing makes it difficult for India to follow up on his headline-generating outreach.

One western diplomat, whose head of state had recently met PM Modi, said an over-worked Indian foreign ministry official was baffled when they followed up on that discussion. The Indian official did not have the most basic details of the nations' bilateral cooperation and asked the embassy to fill him in, the diplomat said, asking not to be identified to discuss a private encounter. 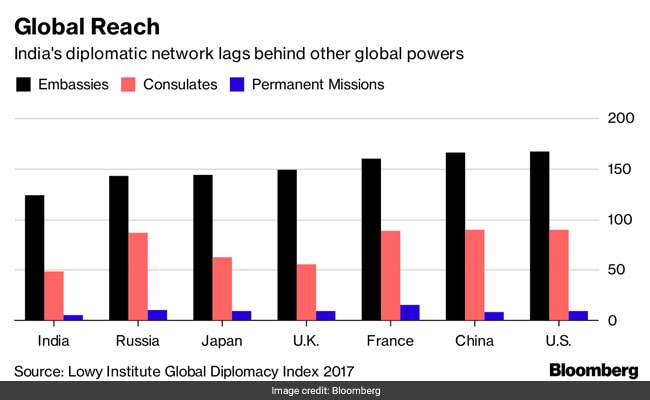 India is vastly outnumbered by the Japanese and Australian services of around 6,000 people.

In New Delhi, diplomats have long complained they can't get meetings with harried foreign ministry staff, said Lalit Mansingh, who served as India's ambassador to the U.S. and as foreign secretary, the ministry's top post.

"A small foreign service was adequate when we were a regional player, but now we want to be a global player," Mr Mansingh said. "We need the manpower."

Still, western allies view India as a reliable democracy in a tricky neighbourhood. In August, Mr Pompeo praised India on Independence Day for "taking its rightful place as a leading global power," and setting an example to "the world by supporting democracy, diversity, and the rule of law."

Though New Delhi lacks Beijing's cash, the country still makes loans to countries in South Asia and Africa as it hopes to expand its influence. In March, PM Modi approved plans to open 18 new missions in Africa between 2018 and 2021, including one in Djibouti, where China has a military base.

The shortage of diplomats persists, however, due to a bureaucratic hiring process in which the ministry can take only those who pass India's colonial-era civil services exam.

Many think the time has come for a broader expansion and reform process that opens up the ministry to more short-term consultants and experts, even if career foreign service officers have generally pushed back against these moves.

Nirupama Rao, foreign secretary between 2009 and 2011, said she requested officers from outside the MEA to be deployed at headquarters and by 2016, a total of 66 officers from other ministries were serving on temporary assignments in the ministry. But more needs to be done, Ms Rao said.

"The foreign service has to understand that India's ascent to its rightful place as a leading global power must involve a revamping of its structure and time-honoured methods of functioning," she said. "This is our Road to Damascus moment."