The startup, incubated at the Indian Institute of Technology-Madras, also plans to launch its customisable Agnibaan rocket from the launchpad before the end of this year. 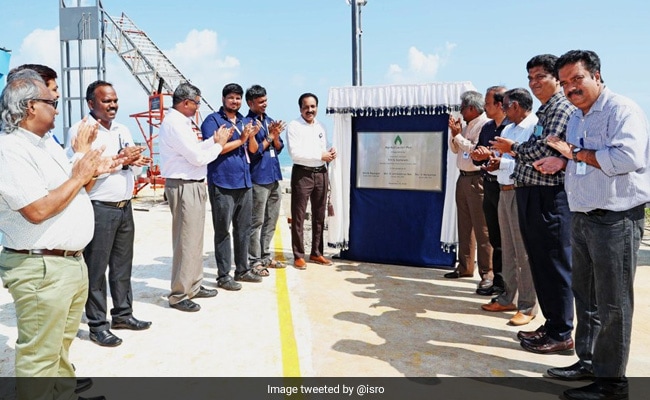 "It is a dream come true for all of us," Agnikul Cosmos co-founder, CEO said.

India's first launchpad and mission control centre designed and operated by a private player has been inaugurated at the Satish Dhawan Space Center in Sriharikota, space startup Agnikul Cosmos announced on Monday.

The startup, incubated at the Indian Institute of Technology-Madras, also plans to launch its customisable Agnibaan rocket from the launchpad before the end of this year.

The facility, designed by Agnikul Cosmos and executed with the support of ISRO and IN-SPACe, has two sections -- the Agnikul Launchpad (ALP) and the Agnikul Mission Control Center (AMCC).

"The first exclusive launchpad for a private launch vehicle has come up at the Satish Dhawan Space Center (SDSC). Now, India can travel to space from one more space platform. Thanks to Agnikul," S Somanath said. ISRO operates two launchpads at the SDSC.

Agnikul co-founder and CEO Srinath Ravichandran said, "It is a dream come true for all of us at Agnikul to launch our vehicles from a facility we have designed and built ourselves."

Agnikul's first launch from this pad will be a controlled and guided mission. It will have a vertical launch using its patented engine, according to a statement issued by the startup.

It said Agnibaan is a highly customisable two-stage launch vehicle capable of taking up to 100 kg payload to orbits around 700-km high and enables plug-and-play configuration.

Additionally, it has the ability to, as necessary, share data and other critical information with ISRO's Mission Control Center, the statement said.

"We never imagined to have Agnikul's launchpad inside Sriharikota for our launches and this has only been possible with the consistent support of ISRO and IN-SPACe," co-founder of Agnikul, Moin SPM, said.

Founded in 2017 by Ravichandran, Moin and Professor S R Chakravarthy of IIT-Madras, Agnikul aims at making space accessible and affordable.