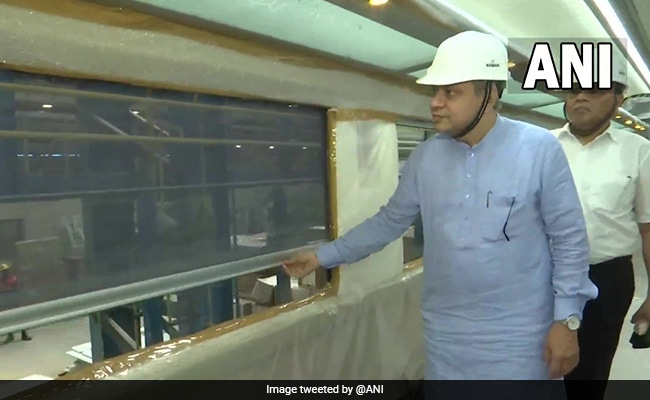 Union Minister for Railways, Ashwini Vaishnaw flagged off the 12,000th LHB coach rolled out by the Integral Coach Factory in Chennai on Friday and reiterated that there is no question of privatisation of Railways.

The Minister inspected the Vande Bharat Express coaches under production at the LHB shed of Furnishing Factory, ICF. The first two prototype rakes are planned to be turned out by August 2022 and the Indian Railways is committed to roll out 75 Vande Bharat rakes by August 2023, the ICF said.

During his interaction with the media, the Minister said Vande Bharat express is a proud project for Indian Railways. "I congratulate the Team ICF for the design and development of these coaches which is of world class. All regions of India will be connected through Vande Bharat Express trains as envisaged by Prime Minister Narendra Modi which is a dream coming true for all of us," he said.

There is no question of privatisation of Railways, the Minister asserted. The focus is totally on adaptation of new technologies for the betterment of Indian Railways, such as Kavach Anti-collision safety devices, that will be fitted on Vande Bharat Express coaches as well.

"I recommend all Railway staff working in Tamil Nadu to learn Tamil language for better interaction with rail users in addition to smooth and safe operation of trains. India is a country with many beautiful languages and we need to enjoy the beauty of each and every language." Prime Minister Narendra Modi's vision is to transform Indian Railways to give better passenger experience, higher safety, with more passenger capacity. All railway stations are being re-developed and 50 stations have already been 'undergoing the process', he said.

In Tamil Nadu, five stations including Chennai Egmore, Madurai, Kaniyakumari, Rameshwaram and Katpadi have been shortlisted under the project.

A sum of Rs 3,685 crore have been allotted for railway projects in Tamil Nadu in the current budget. Under PM Gati Shakti project, many more developments are on the anvil for railways, he said.