Arvind Krishna's appointment as head of the global IT giant adds to the growing list of Indian-origin executives at the helm of some of the biggest multinational companies. 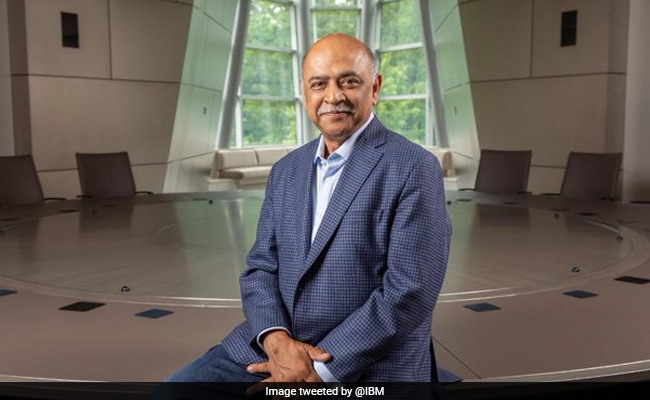 Arvind Krishna, 57, had joined IBM in 1990 and has an undergraduate degree from the IIT-Kanpur.

Indian-origin technology executive Arvind Krishna has been elected Chief Executive Officer of American IT giant IBM after a "world-class succession process", succeeding Virginia Rometty, who described him as the "right CEO for the next era at IBM" and "well-positioned" to lead the company into the cloud and cognitive era.

The IBM Board of Directors elected Arvind Krishna as company CEO and member of the Board of Directors effective April 6. Mr Krishna is currently IBM Senior Vice President for Cloud and Cognitive Software and will succeed Rometty, 62 who will retire after almost 40 years with the company at the end of the year.

Arvind Krishna, 57, had joined IBM in 1990 and has an undergraduate degree from the Indian Institute of Technology, Kanpur, and a PhD in electrical engineering from the University of Illinois at Urbana-Champaign.

"I am thrilled and humbled to be elected as the next Chief Executive Officer of IBM, and appreciate the confidence that Ginni and the Board have placed in me," Mr Krishna said in a press statement released by IBM.

Arvind Krishna said "IBM has such talented people and technology that we can bring together to help our clients solve their toughest problems. "I am looking forward to working with IBMers, Red Hatters and clients around the world at this unique time of fast-paced change in the IT industry. We have great opportunities ahead to help our clients advance the transformation of their business while also remaining the global leader in the trusted stewardship of technology," he said.

Virginia Rometty, who had been IBM's Chairman, President and CEO, will continue as Executive Chairman of the Board and serve through the end of the year, when she will retire. She described Krishna as the "right CEO for the next era at IBM" who is "well-positioned to lead IBM and its clients into the cloud and cognitive era."

Virginia Rometty said Mr Krishna is a "brilliant technologist who has played a significant role in developing our key technologies such as artificial intelligence, cloud, quantum computing and blockchain. He is also a superb operational leader, able to win today while building the business of tomorrow."

She said Arvind Krishna has grown IBM's Cloud and Cognitive Software business and led the largest acquisition in the company''s history. Krishna was a "principal architect" of the company's acquisition of Red Hat.

"Through his multiple experiences running businesses in IBM, Arvind has built an outstanding track record of bold transformations and proven business results, and is an authentic, values-driven leader."
The IBM Board also elected James Whitehurst, IBM Senior Vice President and CEO of Red Hat, as IBM President.

Virginia  Rometty added that in both Krishna and Whitehurst, the Board has elected a "proven technical and business-savvy leadership team."

Lead Director of the IBM Board of Directors Michael Eskew said with the strong foundation now established by Rometty for IBM''s future, the Board is confident that Krishna is the "right CEO to lead IBM. "The Board ran a world-class succession process and found in Arvind a leader with the business acumen, operational skills, and technology vision needed to guide IBM in this fast-moving industry," Eskew said.

Chairman of the Board's Executive Compensation and Management Resources Committee Alex Gorsky said Krishna thinks and executes squarely at the intersection of business and technology. Gorsky said he is an "ideal leader" to succeed Rometty and take IBM and its clients into the next chapter of the cloud and cognitive era.

The IBM statement said that as IBM Senior Vice President for Cloud and Cognitive Software, Krishna led the IBM business unit that provides the cloud and data platform on which IBM''s clients build the future.

Previously, he was general manager of IBM Systems and Technology Group''s development and manufacturing organisation, responsible for developing and engineering advanced semiconductor materials through microprocessors, servers, and storage systems. Prior to that, Arvind was general manager of IBM Information Management, which included database, information integration, and big data software solutions. He served as vice president of strategy for IBM Software.

He also held several key technical roles in IBM Software and IBM Research, where he pioneered IBM''s security software business.
According to his profile on the IBM website, Krishna is the recipient of distinguished alumni awards from IITK and the University of Illinois, is the co-author of 15 patents, has been the editor of IEEE and ACM journals, and has published extensively in technical conferences and journals.