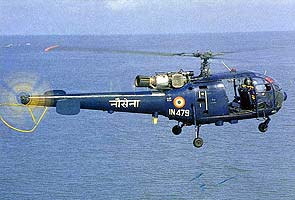 A diver who was on board has also been killed.

The rotor of the helicopter, which had flown from Mumbai to Dabolim, broke off while landing, the PTI has reported quoting Navy sources. The chopper then caught fire, they said.

Promoted
Listen to the latest songs, only on JioSaavn.com
A press release issued by the Navy says ... The helicopter on transit from Mumbai to Bangalore was to make a scheduled re-fuelling halt at Goa. A Board of Inquiry to ascertain the cause has been ordered.