Navy's Biggest Ship, INS Vikramaditya, To Get Upgrade For Its Air Wing

Technodinamika, a subsidiary of Russia's Rostec State Corporation, will install the system in the Indian Navy's aircraft carrier INS Vikramaditya 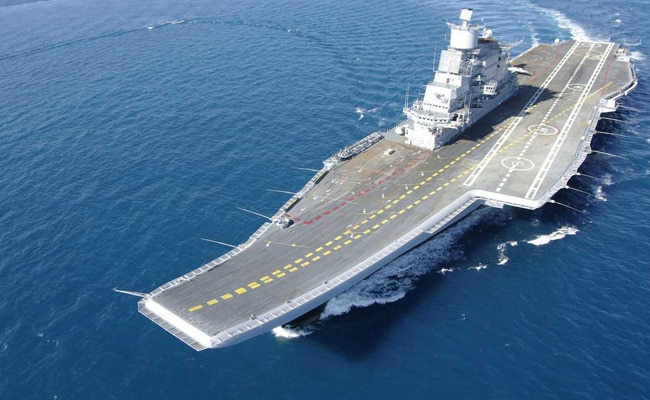 For the first time, India's only aircraft carrier INS Vikramaditya will be fitted with a marine hydraulic system to boost the air operations of the ship.

Technodinamika, a subsidiary of Russia's Rostec State Corporation, will install the system in the Indian Navy ship by May 2019, the defence firm's chief executive Igor Nasenkov said.

The marine hydraulic systems, whose technical terms go by "GS-1MF" and "GS-3", are used for refuelling, cleaning and pressurisation of hydraulic systems of aircraft and helicopters on board the INS Vikramaditya.

The GS-1MF hydraulic system is used in helicopters, while GS-3 is used in aircraft.

The upgrades and sea trials will be done in India.

"Installation supervision of marine hydraulic systems at Vikramaditya is an important step in the upgrade of what is currently the most powerful aircraft carrier of the Indian Navy," Mr Nasenkov said.

"The Vikramaditya project is extremely promising taking into account the long-term development programme of the Indian aircraft fleet, under which by 2027 it will acquire two more ships," he said.

Technodinamika specialises in development, manufacturing and after-sale servicing for systems and equipment of civil and military aircraft.

The $2.3 billion aircraft carrier came to India from Russia in January 2014. INS Vikramaditya, which was commissioned into the Indian Navy in November 2013 at the Sevmash shipyard in north Russia's Severodvinsk, is based at its home port at Karwar in Karnataka.

INS Vikramaditya is 284 metres long and 60 metres high -- that's about as high as a 20-storeyed building. The ship weighs 40,000 tonnes and is the biggest and heaviest ship in the Indian Navy.