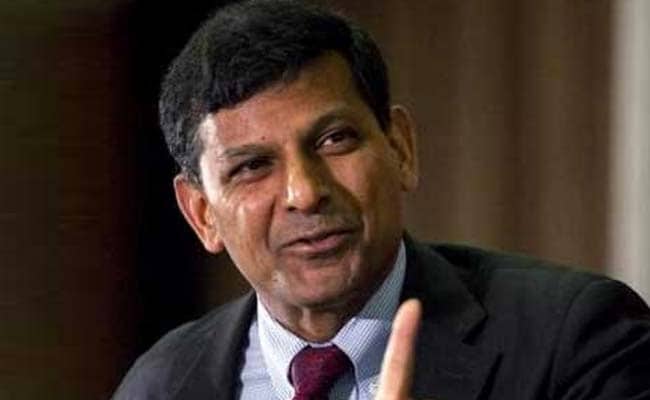 Raghuram Rajan, known to have frank views on state of affairs in the Indian and global economy, said "a bunch of good things have happened" in India, but there were "still some things to do". (File Photo)

Washington: With India being often described as 'the bright spot in the global economy', Reserve Bank Governor Raghuram Rajan sees this as a case of "the one-eyed man" being king in the land of the blind.

Amid gloomy global economic conditions, Indian economy has been described by many as one of the few bright spots, including by IMF, while RBI under Mr Rajan has also been credited with necessary steps to minimise the impact of external shocks on the country's financial system.

"I think we have still to get to a place where we feel satisfied. We have this saying -- 'In the land of the blind, the one-eyed man is king'. We are a little bit that way," Mr Rajan said when asked for his take on the 'bright spot' theory and what was his "secret sauce" to ensure this positioning.

Mr Rajan, a former chief economist of the International Monetary Fund and an on-leave professor of finance at the University of Chicago Booth School of Business, was here for Spring Meetings of the World Bank and the IMF, as also for the G20 Meeting of Finance Ministers and Central Bank Governors.

"We feel things are turning to the point where we could achieve what we believe is our medium-run growth potential. Because things are falling into place. Investment is starting to pick up strongly. We have a fair degree of macro-stability. Of course, not immune to every shock, but immune to a fair number of shocks," Mr Rajan said in an interview to MarketWatch. MarketWatch is published by Dow Jones & Co and is part of The Wall Street Digital Network.

Mr Rajan, known to have frank views on state of affairs in the Indian and global economy, said "a bunch of good things have happened" in India, but there were "still some things to do".

He listed out achievements on fronts like current account and fiscal deficit and said inflation has come down from 11 per cent to below 5 per cent, making room for interest rates to come down.

"Of course, structural reforms are ongoing. The government is engaged in bringing out a new bankruptcy code. There is Goods and Services Tax on the anvil. But there is a lot of exciting stuff which is already happening," he said.

"It is a public platform, so anybody can participate. It is not owned by any one company unlike Apple Pay or Android Pay or whatever. I think it is the first of its kind.

"So, technological developments are happening and making for a more, hopefully, reasonable life for a lot of people. Let's see how it goes," he said.

Asked about his views on comparison between India and China, the RBI Governor said India was nearly a decade behind in terms of start of the reform process and this reflects in the relative size of the two economies.

"We are about a quarter to a fifth their size. I think that we could catch up if we do the right things over a period of time.

"It is extraordinary what good policies they (China) followed to get where they are, so we have to be very good at our policy-making as well as our implementation. I think what people admire China for is how they have managed to get things done.

"Now we have some strengths of our own, and we should emphasize those - I think there is a significant amount of flair and creativity in the Indian economy and we have to try and capitalise on those as we are trying to grow. We shouldn't follow the same path that others have followed.

"But that means working very hard and creating the appropriate infrastructure, creating the human capital that we need to succeed. Building up a good regulatory environment, light but effective, and, of course, building adequate access to finance."

Mr Rajan refused to call his monetary policy actions "opportunistic easing" and said RBI was still in an accommodative phase. He has been saying rates can come down further if inflation cools further and monsoon turns out to be good.

"Now, given all the pushes and pulls in the global economy, you can forecast but you're not quite sure your forecast will come out. So, we're sort of a little more data-driven than we would be in more normal times. As the data come in and we get more certainty about how things are playing out, we will act accordingly."

On monsoon, Mr Rajan said it is a very important factor in India.

"It does significantly influence sentiment in rural areas, rural demand. It certainly affects about 50 per cent of our population which is tied in some way to agriculture. Only 15 per cent of value-added is agriculture and that is still falling, but many people have rural links. So, the monsoon does impact all that.

"It has a moderate impact on food prices because good food management can alleviate the effect of the monsoon. But if we have a bountiful monsoon, then we don't need effective food management to get lower food prices. We are all keeping our fingers crossed. The good news seems to be that the meteorological department is saying it is probably going to be a good monsoon."

To a question about whether he would get another term after his current tenure as RBI chief ends in September, Mr Rajan said, "It is a question that has to be answered."