Indian diplomat flies home after indictment in US 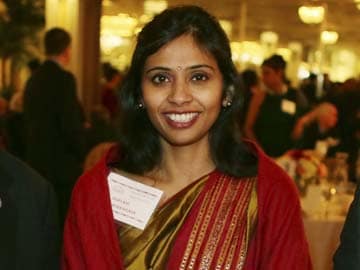 New Delhi: An Indian diplomat whose recent arrest in New York caused an uproar in her home country was on a plane bound for her homeland, Indian officials said Friday, capping a drama that saw her indicted a day earlier in the United States.

The departure of the envoy, Devyani Khobragade, came two days after she was accorded the full privileges and immunities of a diplomat - a set of rights not usually extended to consular officers. The statement from India's Ministry of Foreign Affairs about her departure said that the United States had asked India to waive her immunity but that India had "declined to do so" and transferred her to a new position at the ministry in Delhi.

"At the time of her departure to India, counselor Khobragade reiterated her innocence on the charges filed against her," said the ministry statement. "She also affirmed her determination to ensure that the episode would not leave a lasting impact on her family, in particular, her children, who are still in the United States."

Khobragade, 39, was arrested Dec. 12 on a criminal complaint, charging her with visa fraud and making false statements in connection with her treatment of a domestic worker, Sangeeta Richard, who, prosecutors said, had been overworked and underpaid by Khobragade.

The indictment, handed up Thursday in U.S. District Court in Manhattan, charged Khobragade with the same counts, but it also accused her and others of trying to "silence and intimidate the victim and her family and lie to Indian authorities and courts."

The decision by Preet Bharara, the U.S. attorney for the Southern District of New York, to seek the indictment indicated that negotiations to resolve the case through a plea bargain had broken down.

But the revelation that Khobragade had received immunity and had been told to leave the country suggested that a separate understanding had been reached with other U.S. officials with the goal of relaxing tensions with India.

Khobragade's lawyer, Daniel N. Arshack, said his client was pleased that the State Department "did the right thing" by recognizing the diplomatic status "to which Dr. Khobragade has always been entitled."

"She is pleased to be returning to her country," he added. "Her head is held high. She knows she has done no wrong, and she looks forward to assuring that the truth is known."

Khobragade's husband, a U.S. citizen, and her children remain in the United States.

Her father, Uttam Khobragade, said in a televised news conference Friday that his daughter's family would travel to India in the near future.

He said his daughter had made a principled stand in the wake of her arrest, refusing an offer to drop the charges if she paid a fine and admitted wrongdoing. Last week, Uttam Khobragade, who has headed food and housing agencies in the state of Maharashtra and has said he now plans to enter politics, picketed the U.S. consulate in Mumbai.

"She, as a proud Indian, gives more importance to the sovereignty of this country and the integrity of the judicial system of India than the relief that she was being offered," he said. "She decided that my country's sovereignty is more dearer to me than my personal life and comfort at this moment."

Richard, Devyani Khobragade's former housekeeper, said in a statement issued through Safe Horizon, a victim services agency that had been representing her, "I would like to tell other domestic workers who are suffering as I did - you have rights and do not let anyone exploit you."

The indictment accused Khobragade of illegally underpaying Richard and exploiting her. It said that the diplomat had confiscated Richard's passport and never returned it. Richard worked about 94 to 109 hours a week, the indictment said, with limited breaks for calls and meals.

Last June, the indictment said, Richard visited Khobragade's office at the Indian Consulate and said she was unhappy with her work conditions and wanted to return home. Khobragade refused the request and would not return her passport, the indictment says.

Almost immediately, Khobragade and others took steps to prevent her from communicating with lawyers and others, the government charged.

The indictment describes a series of efforts to intimidate Richard and her family. It says Khobragade and a relative repeatedly called Richard's husband in India, pressuring him to disclose his wife's location in New York. Khobragade also took legal action in India against Richard. In November, based on a complaint by Khobragade, an arrest warrant was issued in India charging Richard with extortion and cheating.

Arshack has called the charges against Khobragade "false and baseless."

Promoted
Listen to the latest songs, only on JioSaavn.com
However, Bharara's office, writing to a federal judge Thursday, said that the criminal charges against Khobragade would remain pending.

"We will alert the court promptly if we learn that the defendant returns to the United States in a nonimmune capacity," the prosecutors told Judge Shira A. Scheindlin, "at which time the government will proceed to prosecute this case and prove the charges in the indictment."
© 2014, The New York Times News Service