Coast Guard: 'Varaha' refers to the third incarnation of Lord Vishnu who took the form of a boar to rescue Goddess Earth from the ocean by lifting her on his tusks. 'Varaha' is the projection of the Coast Guard's will and commitment "to serve and protect" the maritime interest of the country. 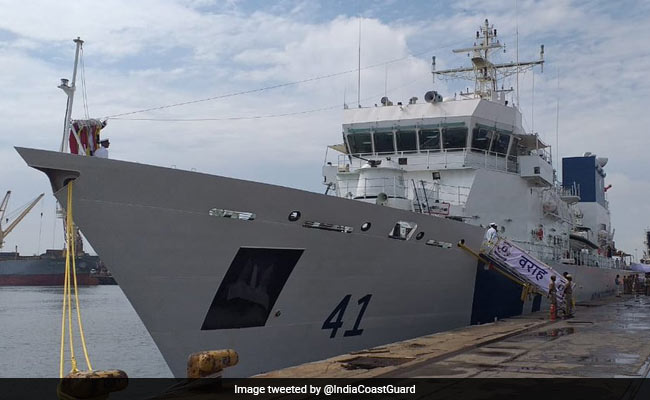 Mr Singh, who arrived in Chennai on Tuesday on a two-day visit, participated in the Investiture Ceremony of Coast Guard.

"it is indeed reassuring to witness the growing strength of Indian Coast Guard, the 'Sentinals of our seas' and capabilities of Larsen and Toubro Shipbuilding Ltd one of the strong supporting pillars for production and maintenance of surface assets of our maritime forces," he said.

Rajnath Singh said the name 'Varaha' from the Puranas reminded of the principle of sacrifice and rescue at sea, saving mother Earth, restoring harmony and strength.

Had a good look at the ICG Varaha after the Commissioning Ceremony.

This ship is well equipped with all the modern technology and the facilities required by the @IndiaCoastGuard to ensure maritime security for our country. pic.twitter.com/SumEBESsKX

The multitude challenges of drug trafficking, oil spill incidents, and the growing threat of maritime terrorism calls for cooperation on regional arrangements with various Maritime Nations and Indian Coast Guard over the years has built bonds of diplomacy, he noted.

Mr Singh said the Coast Guard entered into a memorandum of understanding with seven maritime nations for capacity building training collective and cooperative response to deal with Maritime threats.

India's engagement with the world has seen an exponential growth and today the coast guard is at the fulcrum operating round the clock for safeguarding national interest in the maritime zones of India apart from building bridges of confidence at sea for the safety, security and growth in the Indian ocean.

'Varaha' refers to the third incarnation of Lord Vishnu who took the form of a boar to rescue Goddess Earth from the ocean by lifting her on his tusks. 'Varaha' is the projection of the Coast Guard's will and commitment "to serve and protect" the maritime interest of the country.

According to sources, the ship has been designed and built indigenously by Larsen and Toubro and is fitted with state of the art communication technology and navigation, sensor and machinery.

The vessel is equipped with a 30-mm gun and a 12.7mm gun for enhancing the fighting efficiency of the vessel.

It displaces 2,100 tonne and propelled by two engines and is capable of achieving maximum speed of 26 knots and endurance of 5000 nautical miles. The ship will be manned by 14 officers and 89 crew. It will be commanded by Commandant Dushyant Kumar.

The ship is planned to be based at New Mangalore under the administrative and operational control of Coast Guard Commander (West) Region.