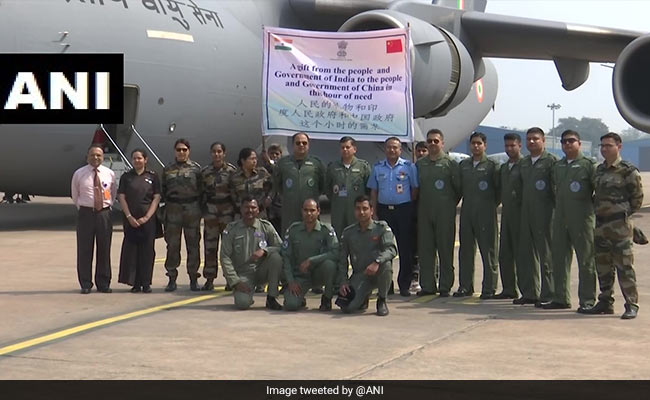 The flight carried masks, gloves and other emergency medical equipment

Last week, India accused China of deliberately delaying permission to send the aircraft while allowing other countries to operate flights from Wuhan to evacuate their citizens. China had rejected India's charges.

The Ministry of External Affairs said the medical supplies will help augment China's efforts to control the outbreak of coronavirus infection which was declared a public health emergency by the World Health Organisation.

It said the aircraft carried around 15 tonnes of medical supplies comprising masks, gloves and other emergency medical equipment.

"The assistance being sent today is also a mark of friendship and solidarity from the people of India towards the people of China as the two countries celebrate 70th anniversary of establishment of diplomatic relations this year," the MEA said in a statement.

It said the assistance has been provided in the wake of the coronavirus outbreak in China and a request by the country to provide supplies such as masks and medical equipment.

The death toll in China's coronavirus epidemic climbed to 2,715 while the number of confirmed cases rose to 78,064.

In a letter to Chinese President Xi Jinping on February 8, Prime Minister Narendra Modi had expressed solidarity with the people and government of China and also offered assistance in their "hour of need as a gift".

"The IAF flight will also bring back some Indian and foreign nationals from some of our neighbouring countries who have sought assistance in travelling to India in keeping with Prime Minister Modi's neighbourhood first policy," the MEA said.

The flight will arrive in India on Thursday.