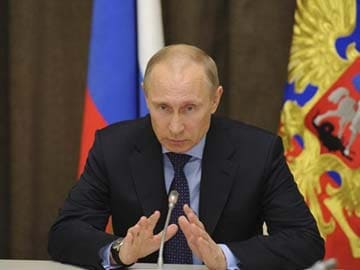 New Delhi: The United States has  condemned Russian President Vladimir Putin's annexation of Crimea from Ukraine and said it is preparing a fresh round of sanctions in response to the worst East-West crisis since the Cold War.

But sources in the Indian government say New Delhi will not support Western sanctions against Russia. The sources told NDTV that while an official position has not yet been taken, India never supports sanctions as a principle.

Tough talk, sanctions and travel bans have not been enough so far to dissuade Mr Putin and his military from seizing control of Crimea and then, after a Crimean referendum that the West has condemned as illegal, declaring it part of Russia. Rejecting international condemnation, Russian President Vladimir Putin cast his government's actions as the righting of historic injustices.

Sources say India is trying to manage a balancing act on Russia since New Delhi does not favour referendums and on principle, it cannot support a referendum as the only basis for breaking up a country.

At the same time, India recognises the "legitimate" interests of Russia in Ukraine, which was articulated on record by National Security Advisor Shiv Shankar Menon last week.
Indian officials are clear that if it comes down to choosing between the West and Russia, New Delhi will back its old ally.

Russian lawmakers today laid out plans to ratify a treaty making Ukraine's Crimea region part of Russia later this week, despite threats of further sanctions from the United States and European Union.

Promoted
Listen to the latest songs, only on JioSaavn.com
President Vladimir Putin signed the treaty with the Russian-backed leaders of Crimea on Tuesday, pressing ahead with an annexation that Washington and Ukraine's new government say is illegal and unacceptable.

President Barack Obama has invited world leaders - excluding Russia - to discuss what comes next during a meeting in Europe next week on the sidelines of a nuclear summit.