India Will Use All Its Might To Protect Its Sovereignty: President Kovind

"IAF continues to modernise in a rapid manner and is in the process of a very comprehensive modernisation plan," President Ram Nath Kovind said. 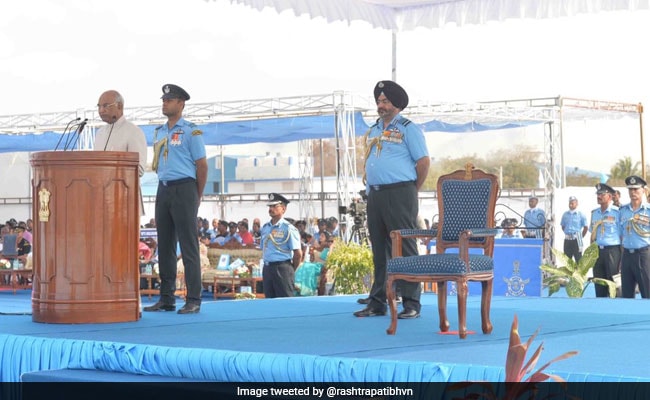 India will use all its might to protect the nation's sovereignty, President Ram Nath Kovind said, referring to the air strikes by Indian Air Force in Pakistan following the Pulwama terror attack of February 14.

"India remains firmly committed to peace, but in case the need arises, we will use all our might to protect the nation. Our Armed Forces reflect our resolve. This valour was on display very recently, as the IAF carried out preemptive strikes on a terrorist camp," President Kovind said at Sulur Air Force Station, near Coimbatore..

President Kovind was speaking after presenting the ''President Colours'' to the Air Force Station, Hakimpet and 5 Base Repair Depot.

The President said the country's armed forces, exemplified by the air warriors, "reflect our firm resolve to defend our nation".

The Indian Air Force had on February 26 carried out strikes on  training facility of the Jaish-e-Mohammed - the terror group behind the suicide attack in Kashmir's Pulwama in which over 40 soldiers were killed. Although the Air Force has refused to divulge the death count, it is believed that over 300 terrorists were killed in the air strike.

The Indian Air Force, the President said, has over the years grown into a modern, technology-intensive force. "IAF continues to modernise in a rapid manner and is in the process of a very comprehensive modernisation plan," he said.

Besides safeguarding the sovereign skies of our nation, the IAF has also been at the forefront of all humanitarian assistance and disaster relief operations, he said.

Both the Air Force station at Hakimpet and the 5 Base Repair Depot at Sulur have a rich history of professional excellence and have served the nation with honour and distinction in peace and during hostilities, the president said.

"The nation honours them today with a deep sense of gratitude and appreciation for their selfless devotion, professionalism and courage in the face of adversity," President Kovind said.

"In acknowledgement and recognition of their outstanding performance, I am pleased to award Colours to the Air Force Station, Hakimpet and the 5 Base Repair Depot," he said.