A monsoon trough is likely to shift southwards and strengthen during the next three to four days and lash Goa, coastal Karnataka and Kerala with widespread rainfall. 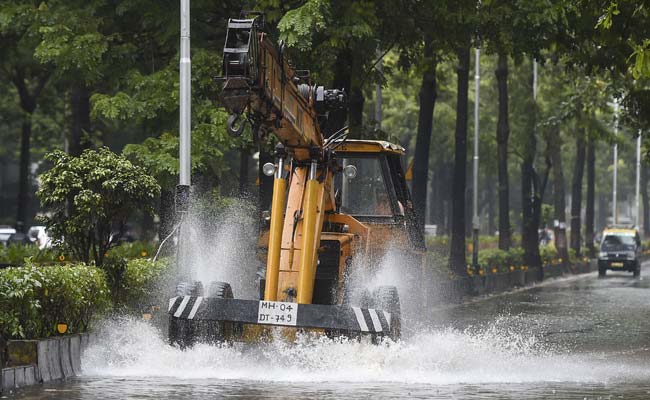 Heavy rainfall in Mumbai from Monday may lead to widespread waterlogging and traffic jams. (File)

Intense rainfall is predicted in Mumbai and other areas on the west coast and in peninsular India during the next three days as the monsoon is likely to strengthen over the Arabian Sea, weather forecasting agencies said on Sunday.

A low-pressure area is likely to develop over north Bay of Bengal and move into Odisha, Chhattisgarh and Madhya Pradesh, and then to central Maharashtra and Gujarat, bringing heavy rainfall, the India Meteorological Department said. Jharkhand and Gangetic West Bengal may also receive moderate rainfall on Tuesday and Wednesday, it said.

A monsoon trough is likely to shift southwards and strengthen during the next three to four days and lash Goa, coastal Karnataka and Kerala with widespread rainfall.

The weather office has sounded an orange alert for heavy rainfall in Kerala's nine districts, including Kottayam, Idukki, Thrissur, Kozhikode and Wayanad, from Tuesday.

Heavy rainfall in Mumbai and its suburbs from Monday may lead to widespread waterlogging and traffic jams. This will be the first heavy spell after July 15 in the metropolis and its suburbs, private forecaster Skymet Weather said.

Meanwhile the flood situation in Bihar worsened as fresh areas were inundated. A total of 53.67 lakh people have been affected in the state and the number has gone up by 4.62 lakh since Saturday, the disaster management authority said in Patna.

Fourteen districts have been affected by flood, including the worst-hit Muzaffarpur.

Early Sunday, the Tirhut canal breached its embankment in Muzaffarpur district, inundating at least a dozen villages. Two NDRF teams have been deployed at the site.

Baghmati, Burhi Gandak, Kamlabalan, Adhwara, Khiroi, Mahananda and Ghaghra rivers are flowing above the danger level at various places and the weather department has forecast light rain in the catchment areas on Monday.

Also on Sunday, over 60 villages in Uttar Pradesh's Bahraich district were inundated after Nepal released water into rivers from its three barrages. This affected over 1.50 lakh people and damaged 171 houses, a district administration official said, adding that the National Disaster Response Force personnel were rescuing people.

"As many as 455 villages in 14 districts of the state have been affected by flood. Of these, 98 villages are marooned," said a UP government spokesperson in Lucknow.

Heavy rainfall is very likely at isolated places in the state until Wednesday.

A sultry weather prevailed in Delhi, Haryana and Punjab in absence of rain. The weather department said the condition will prevail for a week.

The meteorology department in Delhi recorded a maximum temperature of 37 degrees Celsius, three notches above normal, and humidity levels shot up to 95 per cent.

Chandigarh, the common capital of Haryana and Punjab, recorded a maximum of 34.5 degrees Celsius, one notch above the normal.

In Haryana, Hisar recorded a high of 37.9 degrees Celsius, up two notches against normal. Amritsar and Ludhiana in Punjab recorded above normal temperatures.