Admiral Karambir Singh said, "It was an honour and a privilege to host Chief of US Naval Operations" 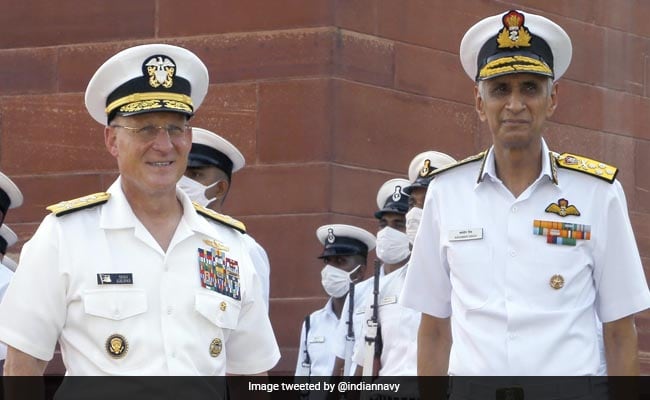 Admiral Karambir Singh on Sunday stated that it was an honour and a privilege to host Chief of US Naval Operations Admiral Michael Gilday during his five-day visit to India and the interaction between the navies of the two countries will pave way for focused outcomes.

During his visit to India from October 11 to 15, Admiral Gilday had held extensive talks with Admiral Singh on various issues, including regional security scenario and the situation in the Indo-Pacific.

It was "an honour and a privilege to host Chief of US Naval Operations", Admiral Singh stated on Twitter through the Indian Navy's account.

"An honour & privilege to host @USNavyCNO. Strat partnership & engagmt b/n our navies has seen increasd vibrancy in past few yrs. I am confident that our interactions will pave way for focused outcomes, taking our relationship on an even higher trajectory" Adm Karambir Singh #CNSpic.twitter.com/nytTvFR9qT

Strategic partnership and engagement between our navies has seen increased vibrancy in the past few years, Admiral Singh noted.

"I am confident that our interactions will pave way for focused outcomes, taking our relationship on an even higher trajectory," Admiral  Singh mentioned.

In June 2016, the US had designated India a "Major Defence Partner" .

The two countries have also inked key defence and security pacts over the past few years, including the Logistics Exchange Memorandum of Agreement (LEMOA) in 2016 that allows their militaries to use each other's bases for repair and replenishment of supplies, as well as provides for deeper cooperation.

The two sides also signed COMCASA (Communications Compatibility and Security Agreement) in 2018 that provides for interoperability between the two militaries and provides for the sale of high-end technology from the US to India.

In October last year, India and the US sealed the BECA (Basic Exchange and Cooperation Agreement) agreement to further boost bilateral defence ties.

The pact provides for sharing of high-end military technology, logistics and geospatial maps between the two countries.