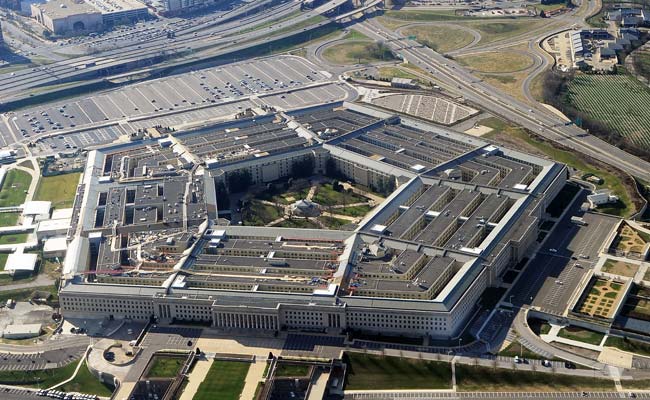 The Joint Working Group on Aircraft Carrier Technology Cooperation (JWGACTC) has been slated for next February, a senior US defence department official has said. (Pic - The US Pentagon)

Washington: Ahead of Defence Minister Manohar Parrikar's maiden US visit next month, the two countries have made progress on their ambitious collaboration in the fields of jet engine and aircraft career technology, according to a Pentagon official.

During the 4th meeting of the India-US Defense Technology and Trade Initiative (DTTI) Group held at the Pentagon on November 17, officials of the two countries discussed the way ahead for the Jet Engine Technology Joint Working, which included exchanging strategies for government and industry cooperation.

Co-chaired by Frank Kendall, Undersecretary of Defence for Acquisition, Technology and Logistics, and by A K Gupta, Indian Secretary (Defence Production), the meeting reviewed progress on the six DTTI Pathfinder efforts announced in January by Prime Minister Narendra Modi and President Barack Obama.

"(The meeting) presented new ideas for collaboration and promised to provide further details on each project proposal, as well as to assess their counterpart's suggestions for possible future joint projects," the official said.

During the meeting, Indian and US officials committed to executing the project plans for the two government-to-government pathfinder projects -- MEHPS and the NGPE.

They also agreed to expeditiously work to resolve remaining issues and complete the Engineer and Scientist Exchange Program (ESEP) Memorandum of Agreement so that the exchange of scientists can begin as soon as possible.

The Indian delegation also visited the Patuxent River Naval Station, Maryland and US Marine Corps Systems Command, Quantico, Virginia where they toured facilities associated with the Jet Engine and Aircraft Carrier Pathfinder initiatives and received a briefing and demonstration from the Project Manager for MEHPS, respectively, the official said.

Expressing satisfaction with DTTI progress to date, India and US defence officials committed to continue to exchange ideas in the search for additional projects for possible co-development and co-production that meet the spirit of DTTI.

Mr Kendall is now likely to visit India in February 2016 for the 5th DTTI Group meeting.