The world added a billion people in the last 12 years. UNFPA said that as the world adds the next billion to its tally of inhabitants, China's contribution will be negative. 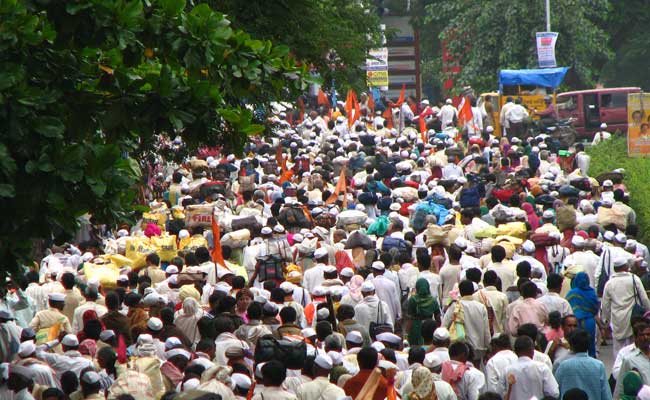 India is expected to surpass China as the world's most populous nation by next year. (Representational)

As the world population touched 8 billion today, India was the largest contributor to the milestone, having added 177 million people, while China, whose contribution to the next billion in the global population is projected to be in the negative, the UN said.

India is expected to surpass China as the world's most populous nation by next year.

The UN Population Fund (UNFPA), in a special graphic to mark the global population reaching eight billion, said Asia and Africa has driven much of this growth is expected to drive the next billion by 2037, while Europe's contribution will be negative due to declining population.

The world added a billion people in the last 12 years. UNFPA said that as the world adds the next billion to its tally of inhabitants, China's contribution will be negative.

The UN said that it took about 12 years for the world population to grow from 7 to 8 billion, but the next billion is expected to take about 14.5 years (2037), reflecting the slowdown in global growth.

World population is projected to reach a peak of around 10.4 billion people during the 2080s and is expected to remain at that level until 2100.

For the increase from 7 to 8 billion, around 70 per cent of the added population was in low-income and lower-middle-income countries.

For the increase from 8 to 9 billion, these two groups of countries are expected to account for more than 90 per cent of global growth, the UN said.

The World Population Prospects 2022, released in July this year said that India's population stands at 1.412 billion in 2022, compared with China's 1.426 billion.

According to UNFPA estimates, 68 per cent of India's population is between 15-64 years old in 2022, while people aged 65 and older were seven per cent of the population.

The report had said that the global population is growing at its slowest rate since 1950, having fallen under 1 per cent in 2020.

China is expected to experience an absolute decline in its population as early as 2023, the report had said.

At the launch of the report in July, Under-Secretary-General for Economic and Social Affairs Liu Zhenmin had said that countries where population growth has slowed must prepare for an increasing proportion of older persons and, in more extreme cases, a decreasing population size.

"China provides a clear example. With the rapid ageing of its population due to the combined effects of very low fertility and increasing life expectancy, growth of China's total population is slowing down, a trend that is likely to continue in the coming decades," Liu said.

The WHO pointed out that China has one of the fastest growing ageing populations in the world.

"The population of people over 60 years in China is projected to reach 28 per cent by 2040, due to longer life expectancy and declining fertility rates," the WHO said.

In 2022, the two most populous regions were both in Asia: Eastern and South-Eastern Asia with 2.3 billion people (29 per cent of the global population) and Central and Southern Asia with 2.1 billion (26 per cent).

China and India, with more than 1.4 billion each, accounted for most of the population in these two regions.

More than half of the projected increase in the global population up to 2050 will be concentrated in eight countries: the Democratic Republic of the Congo, Egypt, Ethiopia, India, Nigeria, Pakistan, the Philippines and the United Republic of Tanzania. Countries of sub-Saharan Africa are expected to contribute more than half of the increase anticipated through 2050, the report added.