India to Launch Communication Satellites in 2016, 2017 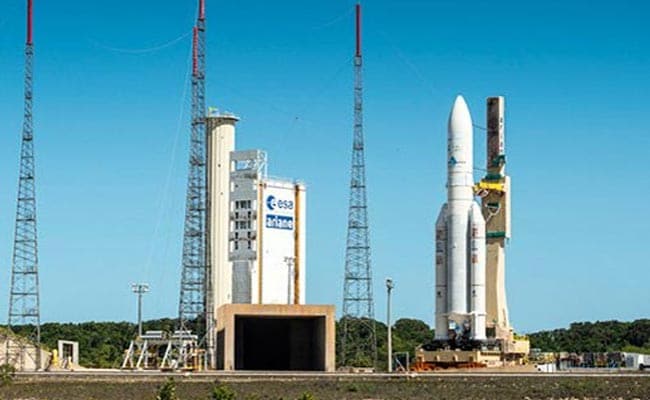 In a statement, Arianespace said Indian Space Research Organisation (ISRO) has selected it to launch GSAT-17 and GSAT-18 telecommunication satellites on Ariane 5 rockets (in pic) from French Guiana in 2016 and 2017.

In a statement, Arianespace said Indian Space Research Organisation (ISRO) has selected it to launch GSAT-17 and GSAT-18 telecommunication satellites on Ariane 5 rockets from French Guiana in 2016 and 2017.

"Weighing approximately 3,400 kg, at launch each, the two spacecraft are planned as replacements for currently-operational relay platforms that provide key national services in multiple frequency bands," Arianespace said after the successful launch of another Indian telecom satellite GSAT-15 on Tuesday evening from spaceport in French Guiana.

While GSAT-15 with its 14 Ku-band transponders (automatic receivers and transmitters of radio signals) is expected to replace the transponder capacities of older satellites, ISRO is silent on the total number of satellite transponders it has under its fold-owned and leased.

According to Arianespace, its next launch - its 11th this year - is Vega Flight VV03, which is scheduled for December 2 and will carry the LISA Pathfinder scientific space probe for its mission to study the ripples in space-time predicted by Albert Einstein's General Theory of Relativity.

Wrapping up the 2015 launch schedule - as well as Arianespace's record pace of 12 flights in 12 months - is the 13th Soyuz mission since this workhorse Russian-built vehicle's Spaceport debut in 2011.