India To Formally Sign Paris Climate Change Accord On April 22 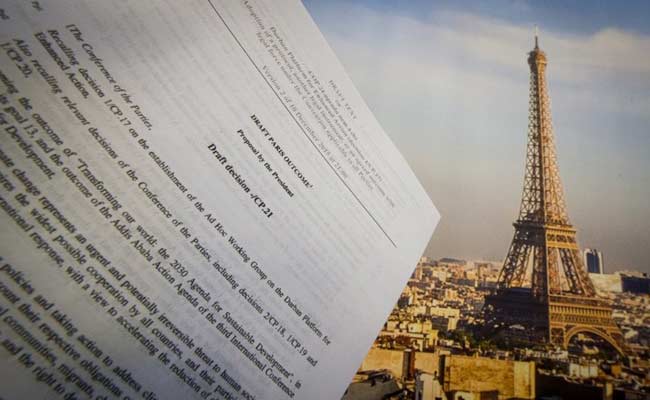 India, along with 100 other nations would ratify the Conference of Parties (COP) 21 global climate agreement on April 22. (File Photo)

Mumbai: India will formally sign the Paris agreement, adopted by more than 190 countries at last year's climate change summit in the French capital, at the UN Headquarters in New York later this month.

Noting that the summit, held in Novemeber-December last year in the French capital, helped change India's image of being "negative and naysayer" after Prime Minister Narendra Modi introduced the concept of climate justice, Union Environment Minister Prakash Javadekar blamed the "uncontrolled" carbon emission by developed nations for the present state of the climate.

"India, along with 100 other nations would ratify the Conference of Parties (COP) 21 global climate agreement on April 22. COP 21 would be ratified at a high-level signing ceremony to be convened at the UN Headquarters in New York," Mr Javadekar said while addressing a symposium 'COP 21 - Building Synergies, Shaping Actions' organised at the University of Mumbai on Saturday.

The agreement sets out a global action plan to put the world on track by limiting global warming to below 2 degrees Celsius.

Under the accord, at least 55 countries, accounting for an estimated 55 per cent of the total global greenhouse gas emissions, will have to ratify or approve the agreement before it enters into force.

"All countries have decided to walk the green path as per their common but differentiated responsibilities. India was always perceived to be a naysayer and negative in its approach and took a corner seat in most of the international conferences.

"But in Paris, Prime Minister Narendra Modi introduced the concept of climate justice driving home the message of sustainable development," Mr Javadekar said while describing the Paris agreement as a "victory of multilateralism" and one which helped "correct" image perception of India.

He said climate change was a "reality" with one degree rise in temperature caused by 150 years of "uncontrolled" carbon emission by the developed world.

While 30 per cent of cumulative contribution was that of the US, 50 per cent by Europe, Canada and other developed countries and 10 per cent by China, while India was responsible for only 3 per cent carbon emission, he said.

"Though India is not part of the problem, it wants to be part of the solution. Our commitment is reflected in every programme being pursued by the government," Mr Javadekar said.