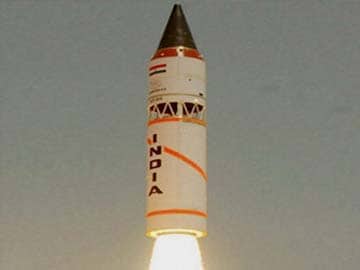 India test-fired its nuclear-capable Agni-III ballistic missile with a strike range of more than 3,000 km as part of a user trial by the Army from Wheeler Island off Odisha coast.

Balasore (Odisha): India today test-fired its nuclear-capable Agni-III ballistic missile with a strike range of more than 3,000 km as part of a user trial by the Army from Wheeler Island off Odisha coast, defence sources said.

The operation of the surface-to-surface missile was carried out by the Strategic Forces Command of the Indian Army with logistic support from the Defence Research and Development Organisation (DRDO).

The indigenously developed missile was flight-tested from a mobile launcher at launch complex-4 of the Integrated Test Range at about 1655 hrs, defence sources said.

"It was the second user trial in the Agni-III series carried out to establish the 'repeatability' of the missile's performance," a DRDO official said.

For data analysis, the entire trajectory of today's trial was monitored through various telemetry stations, electro-optic systems and sophisticated radars located along the coast, and by naval ships anchored near the impact point, the sources said.

The Agni-III missile is powered by a two-stage solid propellant system. With a length of 17 metres, the missile's diameter is 2 metres and launch weight is around 50 tonnes.

It can carry a warhead of 1.5 tonne which is protected by carbon all composite heat shield.

The sleek missile, already inducted into the armed forces, is equipped with hybrid navigation, guidance and control systems along with advanced on-board computer.

Promoted
Listen to the latest songs, only on JioSaavn.com
The electronic systems are hardened for higher vibration, thermal and acoustic effects, a DRDO scientist said.