India extended an additional USD 500 million credit line to Sri Lanka last month to help the neighbouring country import fuel as it has been struggling to pay for imports after its foreign exchange reserves plummeted sharply in recent times. 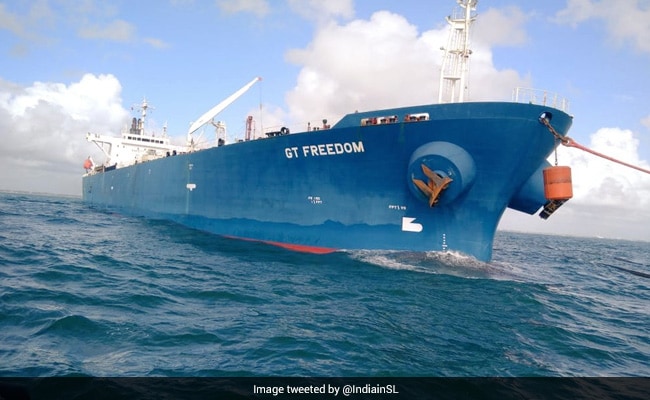 Around 40000 MT of petrol under Indian assistance reached Colombo today.

India extended an additional USD 500 million credit line to Sri Lanka last month to help the neighbouring country import fuel as it has been struggling to pay for imports after its foreign exchange reserves plummeted sharply in recent times, causing a devaluation of its currency and spiralling inflation.

"Commitment delivered!! Around 40000 MT of petrol under Indian assistance reached Colombo today," the Indian High Commission in Colmbo said in a tweet.

India on Saturday provided another 40,000 metric tonnes of diesel to Sri Lanka under the credit line facility.

The Sri Lankan government has asked its non-essential staff to stay at home due to the petrol and diesel shortage. Lawmakers have asked the Parliament Speaker to give them accommodation in hotels as they cannot reach parliament from their homes in the absence of transport fuel.

A severe shortage of foreign reserves has led to long queues for fuel, cooking gas and other essentials while power cuts and soaring food prices have heaped misery on the people.

In a tragic incident, a two-day-old baby died on Sunday due to her father's inability to find petrol to take her to hospital from the central hill area of Haldummullla in the district of Badulla.

The baby was found to be undergoing a yellow discoloration of her skin. Her father was unable to find a vehicle to take her to the hospital due to the current fuel shortages experienced in the country.

Dr Janaka Pathirana, the judicial medical officer at the Diyathalawa hospital, said it was a preventable death.

The Sri Lankan government has warned that it will suspend the delivery of fuel if transporters are threatened, after an angry mob torched a petrol pump owner's house in the country's North Central Province.

Spontaneous protests have been reported at the filling stations across the country where consumers have been waiting in long serpentine queues for fuel for hours on end.

Minister of Power and Energy Kanchana Wijesekera said if the public continues to threaten the truckers delivering the fuel, then the government will have to suspend fuel deliveries for the safety of the transport workforce.

"It has been reported that organised groups are preventing fuel trucks to pass certain areas demanding they be unloaded at different fuel stations and threatening to set fire to them. If this continues, we will have to suspend deliveries for the safety of the transport workforce," he tweeted on Friday.

An Indian credit line for fuel has been in operation since February as Sri Lanka was unable to pay for fuel imports due to the forex crisis.

Earlier, India delivered 40,000 metric tonnes of diesel to Sri Lanka on April 2. This was India's fourth consignment of fuel delivered to Sri Lanka under the Line of Credit. India and Sri Lanka signed a USD 500 million Line of Credit Agreement for purchase of petroleum products on February 2, 2022.

With the economic crisis and the shortage of forex, the Indian credit line of USD 500 million for fuel imports has provided a lifeline to the island nation, which is currently going through the worst economic crisis since independence in 1948.

The economic crisis has also triggered a political crisis in Sri Lanka and a demand for the resignation of President Gotabaya Rajapaksa.

The crisis forced Mahinda Rajapaksa, the elder brother of the president, to resign as the prime minister on May 9.