Vladimir Putin is likely to visit India for the bilateral summit with PM Modi on December 6. 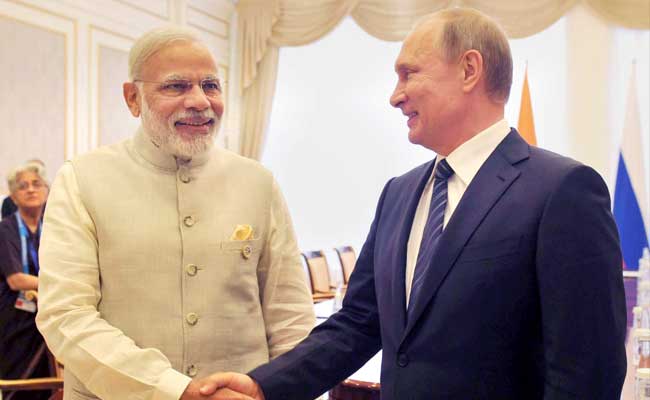 The first edition of India-Russia '2+2' defence and foreign ministerial dialogue may be held alongside a summit between Prime Minister Narendra Modi and President Vladimir Putin that is likely to take place on December 6, people familiar with the developments said on Wednesday.

The two sides are looking at holding the '2+2' dialogue around the time of the summit primarily due to scheduling issues, they said.

Mr Jaishankar and Mr Singh were to travel to Moscow in the last week of November but the plan is being amended primarily due to the Winter session of Parliament that is scheduled from November 29.

The two ministers were also likely to travel to Washington for the India-US '2+2' dialogue with US Secretay of State Antony Blinken and Defence Secretary Lloyd Austin later this month or early December.

But, the people cited above said the talks are now likely to be pushed to January.

Mr Putin is likely to visit India for the bilateral summit with PM Modi on December 6.

The summit is expected to produce specific outcomes in further expanding ties in areas of defence, trade and energy.

It is learnt that the two sides are going to firm up a number of agreements in the areas of defence, trade and investment, and science and technology at the summit.

A framework for military-technical cooperation is set to be renewed for the next decade at the summit besides announcing a joint commission on technology and science.

India and Russia have also reached the final phase of negotiation for a logistics support agreement and it is likely to be signed either during the two-plus-two talks or at the summit.

The pact will allow militaries of the two countries to use each other's bases for repair and replenishment of supplies, besides facilitating scaling up of overall defence cooperation.

The unfolding humanitarian crisis in Afghanistan and implications of the Taliban's takeover of Kabul for regional security are also expected to figure prominently at the summit.

The summit was postponed last year because of the COVID-19 pandemic.

Both the countries have a mechanism under which India's prime minister and the Russian president hold a summit meeting annually to review the entire gamut of ties.

So far 20 Annual Summit meetings have taken place alternatively in India and Russia.

Russia has been a time-tested partner for India and a key pillar of New Delhi's foreign policy.