The foreign ministers of the three countries, at a virtual meeting held under the Russia-India-China (RIC) framework, also reaffirmed their support for the basic principle of an "Afghan-led and Afghan-owned peace process. 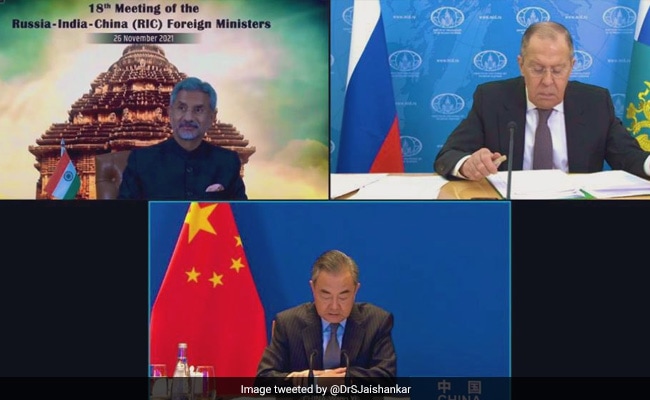 In a significant move, India, Russia and China on Friday called for ensuring that the territory of Afghanistan is not used to attack any country, pitched for the formation of a "truly inclusive" government and pressed for immediate and unhindered humanitarian assistance to the war-torn country.

The foreign ministers of the three countries, at a virtual meeting held under the Russia-India-China (RIC) framework, also reaffirmed their support for the basic principle of an "Afghan-led and Afghan-owned peace process.

The ministers stressed the necessity of "urgent elimination" of UN Security Council proscribed terrorist groups such as al Qaeda, ISIL and others for lasting peace in Afghanistan and the region, the joint communique said.

The meeting was chaired by External Affairs Minister S Jaishankar and was attended by his Chinese counterpart Wang Yi and Russian Foreign Minister Sergey Lavrov.

The communique issued after the talks said the ministers called for the formation of a truly inclusive government that represents all the major ethnic and political groups of the country and emphasised on the central role of the UN in that country.

"They stressed the necessity of urgent elimination of UN Security Council proscribed terrorist groups such as Al-Qaeda, ISIL and others for lasting peace in Afghanistan and the region," it said.

The ministers acknowledged the widespread and sincere demand of the Afghan people for lasting peace.

Expressing concerns regarding dramatic change of the situation in Afghanistan, the ministers advocated a peaceful, secure, united, sovereign, stable and prosperous inclusive Afghanistan that exists in harmony with its neighbours.

"They called on the Taliban to take actions in accordance with the results of all the recently held international and regional formats of interaction on Afghanistan, including the UN Resolutions on Afghanistan," the communique said.

The communique said the foreign ministers of China and Russia reiterated the importance they attached to the status of India in international affairs and supported its aspiration to play a greater role in the United Nations.

The foreign ministers of Russia and China congratulated India for its successful Presidency of the UNSC in August.

Mr Jaishankar, Mr Wang and Mr Lavrov also condemned terrorism in all its manifestations and said that it must be comprehensively countered to achieve a world free of terrorism.

In this context, they called for the early adoption of the UN Comprehensive Convention on International Terrorism.

"The ministers stressed that those committing, orchestrating, inciting or supporting, financing terrorist acts must be held accountable and brought to justice in accordance with existing international commitments on countering terrorism," the communique said.

It said terrorists must be brought to justice under relevant UN Security Council resolutions and the FATF standards, international treaties, including on the basis of the principle "extradite or prosecute".