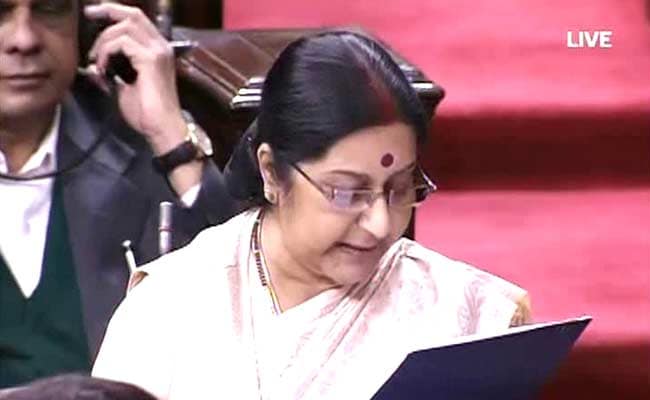 External Affairs Minister Sushma Swaraj made a statement in Rajya Sabha today regarding her visit to Islamabad last week.

New Delhi: India today expressed hope that re-engaging with Pakistan under a 'Comprehensive Bilateral Dialogue' will mark beginning of peace and development as continued estrangement was a hurdle to peace and prosperity in the region.

Making a statement in Rajya Sabha on her last week's visit of Islamabad and recent developments relating to ties between the two neighbours, External Affairs Minister Sushma Swaraj said Prime Minister Narendra Modi had discussed with his Pakistani counterpart Nawaz Sharif on the sidelines of the environment conference in Paris about "re-engaging with each other again."

"The underlying sentiment, on which I am confident that this House concurs fully, was that the continued estrangement of two neighbours was a hurdle to the realisation of our shared vision of a peaceful and prosperous region," she said.

At the same time, there was also a "sharp awareness" that principal obstacles to the growth of ties, especially terrorism, would have to be clearly and directly addressed.

She read out her statement as members of several opposition parties were in the Well vociferously raising slogans on several issues.

Ms Swaraj said following her visit to Islamabad a 'Comprehensive Bilateral Dialogue' with Pakistan will begin with the objective of "removing hurdles in the path of a constructive engagement by addressing issues of concern."

Also, it aims at "exploring and establishing cooperative ties," she said, adding initiatives on trade and connectivity, people-to-people exchanges and humanitarian issues would contribute to welfare of the entire region and promote better understanding and mutual trust.

"The new Dialogue, we sincerely hope, marks a new beginning also for peace and development in the whole region," she said.

Following the Modi-Sharif meeting on November 30, it was decided that the two sides should hold the NSA-level meeting.

The two NSAs focussed on "peace and security, terrorism, tranquility along the Line of Control and Jammu and Kashmir - the state which has been most directly impacted by terrorism and violation of LOC," she said, adding her visit to Islamabad came on the back of these "constructive talks".

Ms Swaraj said in her talks with Mr Sharif and Pakistan Foreign Minister Sartaj Aziz in Islamabad, which where held in the backdrop of this "positive development", the "two sides condemned terrorism and resolved to cooperate to eliminate this menace."

"There we dwelt on the need for Pakistan to expedite the Mumbai terrorist attacks trial. The Indian side was assured of the steps being taken to expedite its early conclusion," she said.

Following this, it was decided to begin a dialogue with Pakistan under the new title 'Comprehensive Bilateral Dialogue' and foreign secretaries have been tasked to work out modalities and schedule of the meetings under the new dialogue, she said.

"I would like to assure the House that this Government accords the highest priority to the country's security. In order to meet any threats in this regard, the government will take all steps, including through diplomatic channels," she said.

The Government, she said, was "committed to building an environment of peaceful and cooperative relations with all our neighbours, including Pakistan, so that the efforts for peace and development in South Asia, initiated by the Government on the day of assuming office itself, are taken further forward."

Ms Swaraj said the 5th Ministerial Conference of the Heart of Asia Istanbul Process on December 8-9 in Islamabad was devoted to the themes of security and connectivity.

"The Conference provided to us an important opportunity on a vital regional platform for political constultations and regional cooperation to reiterate India's commitment to Afghanistan's stability and development and our faith in its future," she said.

The process, she said, brought together friends of Afghanistan from its immediate and extended neighbourhood as well as supporting countries and international organisations to promote political consultations and regional cooperation for a united, democractic, independent, strong and prosperous Afghanistan.

"My visit to Islamabad underlined India's strong commitment to that cause," she said, adding New Delhi at the conference sought full and direct transit for Afghanistan through Pakistan.

"In the context of relations between India and Pakistan, I advocated working together for peace and development in South Asia, with self-confidence and maturity," she said.

Ms Swaraj said the beginning of Comprehensive Bilateral Dialogue was announced in a joint statement following her meeting with Mr Aziz in Islamabad on December 9.

"This decision of the Government follows the recent developments and engagements between the two countries, especially the constructive discussions between their National Security Advisors in Bangkok on December 6, 2015.

"The meeting of the NSAs resulted from discussion between our Prime Minister Narendra Modi and Prime Miniter Nawaz Sharif in Paris on November 30," she said.

The Minister said Prime Minister of Pakistan was invited in May 2014, among other SAARC leaders, by PM Modi to attend the swearing-in ceremony of the new Government.

"This was a demonstration of our commitment to good neighbourly ties with Pakistan, in line with our vision for peace and development in the region through deeper regional integration in South Asia," she said.

In their first meeting, India's views on ties between the countries and its concerns on terrorism and violence were conveyed to the Pakistani authorities.

The meetings as decided between the two sides in May 2014, however, did not take place, she said.