"We Condemn Any Use Of Violence": India On Situation In Myanmar Amid Coup

On whether India will allow people from Myanmar to cross over to the Indian side along the Indo-Myanmar border, the foreign ministry said it is being dealt with as per law as well as on humanitarian considerations. 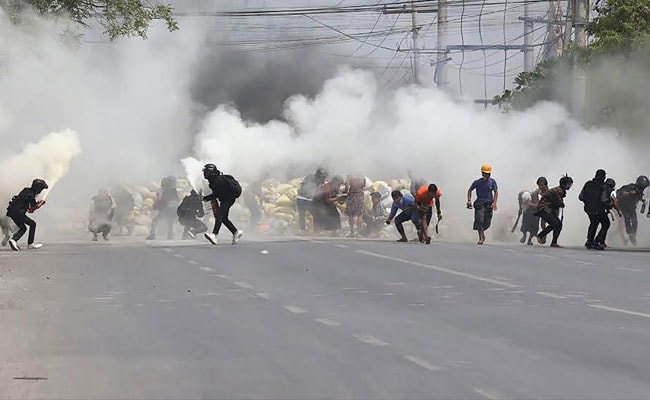 Myanmar has been rocked by protests since the army seized power in the coup on February 1. (File)

As Myanmar's army continued crackdown on civilians protesting against the February 1 coup, India condemned any use of violence and said it stands for the restoration of democracy in the country.

At a media briefing, Spokesperson in the Ministry of External Affairs Arindam Bagchi said India has urged for the release of political prisoners and supported any attempts to resolve the current situation, including through efforts of the 10-nation ASEAN.

"Let me be very clear. We condemn any use of violence. We believe that the rule of law should prevail. We stand for the restoration of democracy in Myanmar," he said.

According to reports, hundreds of people, including children, were killed in the crackdown by Myanmarese authorities. Leader of the National League for Democracy (NLD) Aung San Suu Kyi is among the key people detained by the military following the coup.

On whether India will allow people from Myanmar to cross over to the Indian side along the Indo-Myanmar border, Mr Bagchi said it is being dealt with as per law as well as on humanitarian considerations.

"As far as border crossings are concerned, we are dealing with it as per our laws and humanitarian considerations," he said.

Myanmar has been rocked by massive protests since the army seized power in the coup on February 1. The authorities have shut down internet connectivity in several parts of Myanmar as part of the crackdown on protesters.

"We have urged the release of political prisoners and supported any attempts at resolving the current situation, including through the efforts of the ASEAN," MrBagchi said.

"We remain engaged on this issue with our international interlocutors and at the UN Security Council in an effort to play a balanced and constructive role," he said.

As the situation deteriorated in Myanmar, thousands of people fled to Thailand.

Asked about reports that a diplomat from the Indian embassy in Myanmar attended the armed forces day event on a day some protesters were gunned down, Mr Bagchi said Indian diplomats continue to discharge their regular diplomatic responsibilities in that country.

"We have a functioning embassy in Myanmar. Our ambassador, defence attache and other diplomatic officers continue to discharge their regular diplomatic responsibilities," he said.

Mr Bagchi said nothing more should be read into the defence attache attending the event.

He said the situation in Myanmar did not figure in the BIMSTEC ministerial meeting on Thursday and that Myanmar was represented by its union minister in the ministry of international cooperation. Besides India, BIMSTEC (Bay of Bengal Initiative for Multi-Sectoral Technical and Economic Cooperation) comprises Bangladesh, Myanmar, Sri Lanka, Thailand, Nepal and Bhutan.