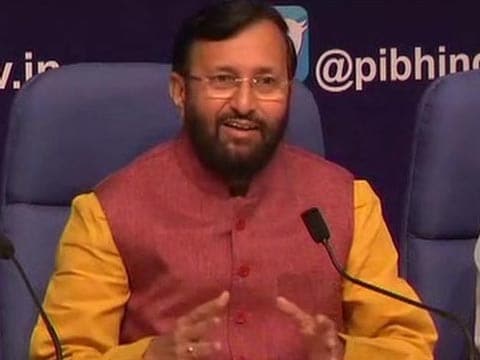 Union Environment Minister, Prakash Javadekar has said that the Paris summit on climate change should not be complicated.

New Delhi: Ahead of the Paris climate change summit, India today asserted that commitment to provide post 2020 finance to developing countries was based on historical responsibilities of developed countries and attempts to expand the donor base will not be "appropriate".

Noting that post 2020 finance is "fundamental" to the success of Paris summit, India also said that the finance beyond 2020 has to be "predictable" and scaled up from USD 100 billion onwards or more than Rs 6.6 lakh crore.

The world is aware of the "enormity" of the task and time is clearly not on its side, Environment Minister Prakash Javadekar said adding one cannot afford to complicate the Paris summit and we should keep Paris simple.

"The commitment to provide finance by developed countries is based on their historical responsibilities and not only on their economic capacities. Any attempt to enlarge the donor base by 'countries in a position to do so' or 'countries willing to do so' will not be appropriate from our perspective," he said.

"To us, the enlarging of donor base and shrinking of recipient base will amount to tinkering with the basic rubric of the Convention and that is not what we intend to do," Mr Javdekar said while making an intervention at the closing plenary session of Pre-Cop 21 in Paris.

Noting that pre 2020 actions are key to building trust among the countries, the Minister said that India strongly believes that there can be no "action holiday" in the pre- 2020 period.

In line with India's stress on mitigation aspect of climate change response, Mr Javdekar said "Paris decision on the pre-2020 actions should incorporate elements of ambitious mitigation actions by developed countries and enhanced support to developing countries to enable them to take affirmative climate action."

He said that while post-2020 finance has to be "predictable and scaled up from USD 100 billion onwards", (India) does not want to see a change in the very paradigm in which finance has been talked about in the The United Nations Framework Convention on Climate Change (UNFCCC).

Mr Javadekar said the Paris agreement has to be ambitious and the contributions have to be "progressively ambitious" and said ambition applies to all elements and not just the mitigation part alone.