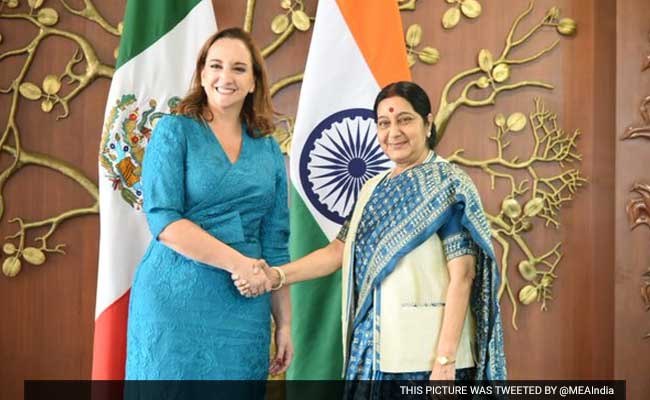 It added that the ministers agreed to exchange high level visits in the near future and also discussed important regional and international issues of mutual interest.

"The two ministers discussed ways and means of elevating the special relationship between India and Mexico," external affairs ministry spokesman Vikas Swarup stated, adding that both sides agreed to hold the next meeting of the joint commission in Mexico in the second half of this year.

Mr Swarup said that Sushma Swaraj acknowledged that the present bilateral trade volume of $6.5 billion was low and sought Mexico's participation in flagship programmes like Make in India, Skill India and Smart Cities.

"The two ministers also discussed cooperation in a number of areas, including oil and gas, renewable energy, urban planning and the housing sector," he said.

India is the third largest importer of crude oil from Mexico. The Latin American country ranks among the top 10 oil-producing nations and has the world's fourth largest shale oil reserves.

"The external affairs minister also mentioned that we would like Mexico's participation in ensuring value addition and greater use of technology in our agriculture and agro-processing sectors," Mr Swarup stated.

"She also conveyed our interest in providing launch facilities for Mexican micro and nano satellites."

The spokesman said that both sides shared their respective perspectives in engaging with the diaspora.

On Friday, delivering a lecture organised by the Indian Council of World Affairs (ICWA), Ms Salinas, while stating that India has the largest diaspora and Mexico the second largest, said that her country could learn a lot from India in dealing with the diaspora.

"India has a long tradition of recognising the value of its diaspora abroad for public diplomacy," she said.

According to Mr Swarup, the Mexican foreign minister also renewed the invitation extended by her country's President Enrique Pena Nieto to Prime Minister Narendra Modi to visit Mexico in the near future.

On Friday, soon after her arrival here on a two-day visit, Ms Salinas called on PM Narendra Modi.

She also interacted with the private sector at a business event organised by the Confederation of Indian Industry (CII).

Earlier on Saturday, Ms Salinas undertook a short ride in the Delhi Metro and inaugurated a photographic exhibition called 'Mexico Is' at the Rajiv Chowk metro station.


(This story has not been edited by NDTV staff and is auto-generated from a syndicated feed.)
Comments
Swaraj meets Mexican foreign ministerIndia Mexico ties

Sanskrit Diwas 2020: 5 Things To Know About One Of The Oldest Languages