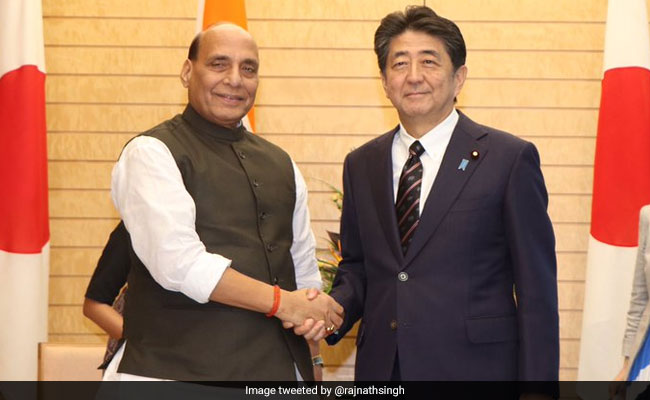 Rajnath Singh said his meeting with Shinzo Abe was "excellent"

Defence Minister Rajnath Singh on Monday held "fruitful" talks with his Japanese counterpart Takeshi Iwaya in Tokyo during which both sides resolved to further deepen bilateral defence and strategic ties.

The defence minister is on a five-day tour of Japan and South Korea. On Tuesday, he will leave for Seoul from Tokyo.

In the annual defence ministerial dialogue, Mr Singh and Mr Iwaya deliberated on the full spectrum of India-Japan defence cooperation.

"Had an extremely fruitful ministerial level dialogue with Japan's Defence Minister Takeshi Iwaya in Tokyo. We discussed the full spectrum of India-Japan defence cooperation," he tweeted.

He said both sides will continue to work together to further deepen the defence ties. Mr Singh is accompanied by a high-level delegation.

Officials said the two sides also deliberated on the overall situation in the Indo-Pacific region where China has been increasing its military presence.

India, Japan and the US have been part of the annual Malabar maritime exercise which is aimed at achieving greater inter-operability among the navies of the three countries.

"India attaches the highest priority to our bilateral relationship with Japan. I conveyed to him the government of India's commitment to further enhance the defence engagements between both the countries," he tweeted.

He also said that regular interactions between Prime Minister Narendra Modi and Abe put the special strategic and global partnership between India-Japan on a higher pedestal. "It has added a new strategic depth to our defence cooperation," he said.

A CEO's Forum followed by a Business-to-Government (B2G) meeting will also be held in Seoul with the participation of members of defence industry from both sides with the aim to encourage India-ROK defence industry cooperation.

"The focus of the visit to South Korea will be to explore new areas of defence cooperation including co-development of military hardware," the official said.

Prime Minister Narendra Modi had visited South Korea in February during which both the countries decided to strengthen strategic ties.