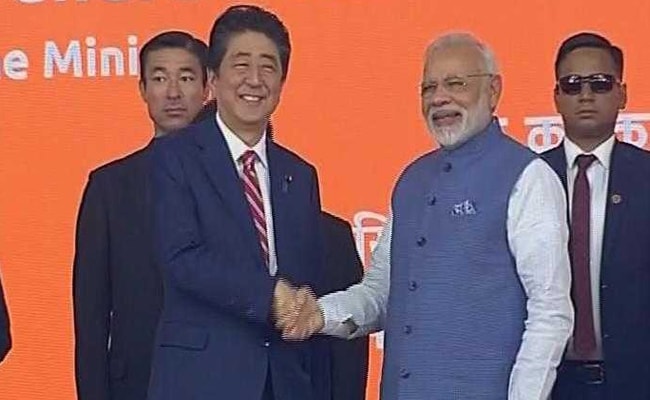 Gandhinagar: India and Japan today inked 15 agreements to further broad-base their strategic partnership and agreed to strengthen cooperation in the Indo-Pacific region where China is increasing its assertiveness.

"The range of special strategic and global partnership is not just limited to bilateral and regional sphere. We have close cooperation on global issues as well," Prime Minister Modi said.

During the talks between the two leaders, India and Japan inked 15 pacts to give a boost to cooperation in various key sectors, including civil aviation, trade, and science and technology.

"We have just signed a joint statement which will serve as a milestone to open a new era for Japan-India relationship... based on that we will strongly promote Japan-India special strategic and global partnership to drive peace and prosperity for Indo-Pacific region and the whole world," Prime Minister Abe said.

The visiting leader also referred to the recent Malabar Japan-India-US naval exercise and said cooperation would be further strengthened.

Referring to the Indo-Japan civil nuclear pact, PM Modi said it would open a new chapter in cooperation in the clean energy sector between the two countries.

"We had signed a historical pact for peaceful use of nuclear energy during my visit to Japan last year. I am whole-heartedly thanking Japan's parliament, its people and particularly Prime Minister Abe for its ratification," PM Modi said.

The nuclear cooperation agreement was signed last November during Prime Minister Modi's visit to Tokyo. The deal allows Japan to export nuclear technology to India, making it the first non-NPT signatory to have such a deal with Tokyo.

On the bullet train project between Ahmedabad and Mumbai, PM Modi said, "It is a major step. It is not just the beginning of high-speed rail. I consider this railway philosophy a lifeline (jeevan rekha), considering our future requirements."

PM Modi said India Post and Japan Post would start a 'cool box service' for Japanese people living in India so they could order their favorite food from Japan.

Promoted
Listen to the latest songs, only on JioSaavn.com
The prime minister also talked about various reform initiatives, including in the areas of taxation, to promote economic growth and asked Japanese companies to take advantage of ease of doing business in India.