Nitin Gadkari said there is enough water available in the country, but the real issue is its effective management. 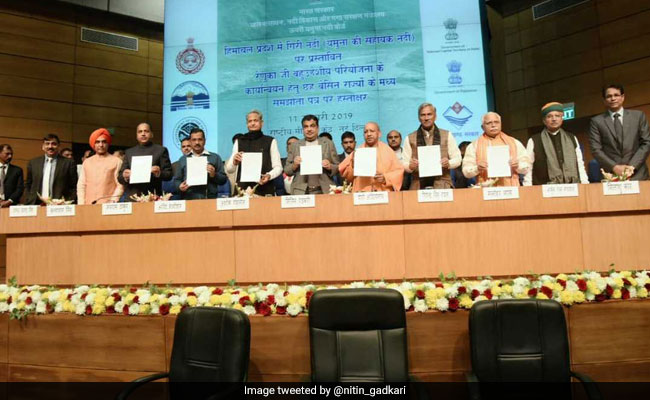 The minister for water resources, river development and Ganga rejuvenation signed an MoU with six chief ministers for the construction of Renukaji Multi-Purpose Dam project in the Upper Yamuna Basin today.

Another agreement was signed for Namami Gange projects in Allahabad under Hybrid Annuity Mode and One-City-One-Operator concept by the National Mission for Clean Ganga, UP Jal Nigam and Dilip Pormal from Prayagraj Water Pvt Ltd.

Mr Gadkari said there is enough water available in the country, but the real issue is its effective management.

"We have done one thing. The rivers awarded to India under the Indus Waters Treaty....(some portion of) our share still goes to Pakistan. The first thing we did was to arrest the (excess) water and we will take it to Punjab, Haryana, Uttar Pradesh and Rajasthan and Delhi will benefit from it," he said.

Of the total 168 million acre-feet, India's share of water from the three allotted rivers is 33 million acre-feet, which constitutes nearly 20 per cent. India uses nearly 93-94 per cent of its share under the Indus Waters Treaty. The rest of the water remains unutilised and goes to Pakistan.

After the Uri attack in 2016, it was decided to fast track water projects to arrest the unutilised water.

The three projects include the Shahpur Kandi dam project, a second Sutlej-Beas link in Punjab and the Ujh Dam project in Jammu and Kashmir.

An agreement has been signed on one project and there has been progress in other two projects, Mr Gadkari said.

Terming the signing of agreement for Renukaji Dam project a historic moment, he said that the government will try to get the Cabinet approval as soon as possible.

Mr Gadkari said that these projects will benefit all basin states and it is a "win-win situation" for everyone.

"Delhi will not face drinking water issues for the next 50 years. Rajasthan, which is at the tail end, will also get water for drinking and irrigation."

He added that these projects will also ensure more flow in River Yamuna which is the need-of-the-hour.